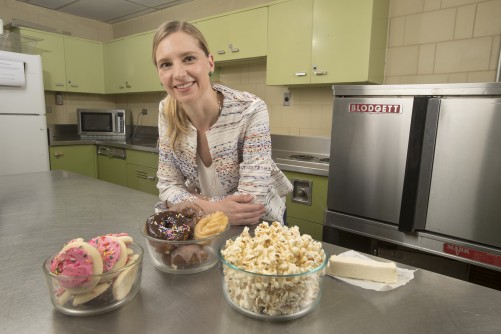 Shauna Downs says that consumers should not notice a difference in taste or cost of products affected by the trans fat ban, such as margarine, bakery products and popcorn.

The Food and Drug Administration’s ban on artificial trans fats goes into effect on June 18, restricting U.S. food manufacturers from adding the artery-clogging material to most of their products.

The food industry has been gradually phasing out artificial trans fats for many years and has ramped up those efforts since 2015 when the FDA announced its finding that partially hydrogenated oils were not safe for human consumption. For the most part, food manufactured after June 18 will no longer contain partially hydrogenated oils. However, for some specific uses the FDA has extended the deadline for compliance by one year.

A ban – rather than mandatory labeling or a voluntary approach – has been found to be the most effective measure of reducing trans fat levels in food and has the greatest potential to reduce cardiovascular disease, said Shauna Downs, an assistant professor at Rutgers School of Public Health.

“By taking an aggressive approach to restricting artificial trans fats in our food supply, the United States has taken a huge stride toward improving our nation’s cardiovascular health,” said Downs, who has studied the implications of trans fat bans versus voluntary measures worldwide.

Downs discusses the implications of the U.S. trans fat ban and what it will mean to the consumer.

What types of products are affected by this ban?

The ban pertains to industrially produced partially hydrogenated oils, not the naturally occurring trans fat that comes from animals such as cows, sheep and goats. Partially hydrogenated oils have typically been made from soybean, cottonseed or other oils to produce a more solid fat, which can be used in processed foods and fast food to give them a longer shelf life and a desirable texture.

How prevalent are trans fats in the American food supply?

It is estimated that between 1 to 3 percent of total calories in the American diet comes from trans fat. The World Health Organization recommends limiting trans fat consumption to less than 1 percent of total energy.

In what ways do trans fats negatively affect health?

Consuming high amounts of artificial trans fat increases your risk of coronary heart disease. Consider: A 2 percent reduction in energy from trans fat has been associated with a 23 percent decrease in coronary heart disease. Consuming trans fats increases your “bad” LDL cholesterol and lowers your “good” HDL cholesterol. High trans fat intakes may be associated with an increase in fat in the abdominal cavity, insulin resistance and type 2 diabetes. The FDA estimates that eliminating trans fat from the U.S. food supply would prevent 20,000 heart attacks and 7,000 deaths from heart disease annually.

What population is most affected by trans fats?

Populations in many low- and middle-income countries around the world also tend to have higher intakes of trans fat since less progress has been made in reducing them in the food supply.

Why is a ban the most effective approach for reducing trans fat levels?

While mandatory labeling and voluntary removal have been effective in reducing trans fat in many countries, foods high in trans fat remain on the market, where consumers can still purchase them. Bans do not rely on consumers’ ability to afford trans fat–free products or to read and understand the nutrition facts table.

The lack of persistent industry opposition in the United States has made strong trans fat regulation possible here. The industry has been reformulating its products over the past decade and knows that eliminating trans fats is feasible and economically viable.

What other countries have enacted trans fat bans?

Denmark was the first country to implement a ban, nearly 15 years ago. Other countries that have bans in place include Switzerland, Austria, Norway, Iran, Hungary, Argentina and others. By the end of this year, nearly 20 countries around the world will have placed mandatory restrictions on trans fat. Studies in Denmark and Argentina have found significant reductions in cardiovascular disease deaths attributed to the ban.

In May 2018, the World Health Organization called for the global elimination of trans fat by 2023. They released the REPLACE roadmap to provide countries with the strategic actions to ensure the “prompt, complete and sustained elimination of this toxic chemical from the food supply.”

Will consumers notice any difference in price or taste in products when the ban goes into effect?

The prices and taste should remain the same.  Although the World Health Organization has called for the replacement of trans fat with healthier unsaturated oils, what label-reading consumers will notice, however, is an increase in palm oil on the ingredients list of packaged foods. Palm oil is cheap and widely available. It also has a high amount of saturated fat, giving it a semi-solid consistency. That makes it an attractive option for reformulating products that previously contained partially hydrogenated oils. While there are some studies that suggest that palm oil may increase your risk of cardiovascular disease as compared to other oils, the current evidence is insufficient to form a definitive conclusion on any negative effects on health.