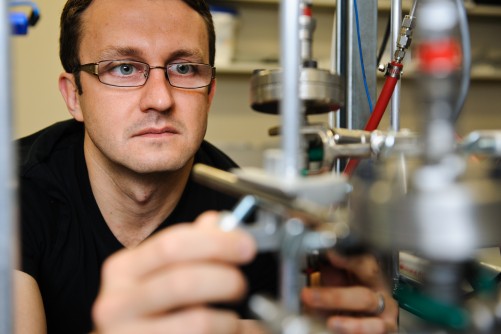 Newswise — TUSCALOOSA, Ala. — Less than a year after patenting a process that could improve stripping greenhouse gasses from industrial emissions, a University of Alabama engineering professor was recently granted another patent that uses a different solvent to accomplish the same goal.

The newest method, patented by UA and Dr. Jason E. Bara, assistant professor of chemical and biological engineering, uses a form of liquid salt that could be swapped with chemicals currently used to scrub harmful emissions, such as carbon dioxide, or CO2, from industrial emissions. In a different patent granted in August 2013, Bara proposed switching currently used chemicals with a class of low volatility organic molecules. It is all part of his research focus of showing different, and possibly better, ways to capture harmful emissions.

“We pursue this work with novel solvents to hopefully achieve the greatest energy efficiency for CO2 capture,” Bara said. “It’s the magnitude of the problem and the impact on the global economy that makes it extremely important that capture processes be highly optimized when they are rolled out at full scale.”

Nearly all commercially-available efforts at scrubbing greenhouse gasses, GHG’s, from emissions use a liquid solution of water and amine, derived from ammonia, that contacts the stream, removing CO2 or other unwanted gases. The system patented by Bara would replace much of the water in the aqueous amine solutions with imido-acid salts, a negatively-charged group of organic solvents with almost no vapor pressure, or boiling point.

The patent, granted in March to UA, claims the chemical make-up of the imido-acid salts for use in capturing CO2 and other gases from natural gas and post-combustion emissions such as those from coal-fired power plants.

There are global efforts to reduce the man-made emission of GHG’s that likely contribute to global warming by trapping the sun’s heat inside the atmosphere, including emission standards and financial penalties on excess emissions. The most common and most studied method is introducing monoethanolamine, or MEA, into natural gas or post-combustion emissions, a process that can capture about 90 percent of CO2 from flue gas.

The use of MEA to scrub flue gas is energy intensive since recycling the solution requires boiling it to desorb, or rid, the CO2 before recycle of the MEA solution back into contact with the flue gas. The cost of the energy needed to use MEA in power plants, for example, would likely be passed onto consumers, Bara said.

Bara’s work shows that swapping most of the water in the process for other chemical solvents saves energy since the solvent can be regenerated without boiling large amounts of water, a cost and energy-intensive process. Bara’s research shows the solvent system can capture the same or more CO2 than MEA.

The imido-acid salts are a version of the organic molecules patented by Bara and UA in August 2013 to perform the same function as imidazoles, but with an anionic, meaning negatively charged, group tethered to them. The anionic group suppresses the vapor pressure to zero, which means the salts do not vaporize during the CO2 absorption process.

The cost of building and operating a CO2 capture process to treat 90 percent of a plant’s emissions is a major reason the energy industry has been reluctant to embrace carbon capture on a large scale, Bara said.

“Solvent-based processes are leading contenders to be the first deployed in carbon capture, so it’s crucial that research consider a wide variety of solvents before making a decision on what’s ‘best’,” he said. “This latest patent offers a new solvent composition that eliminates organic vapor losses since it contains a salt.”

The patent also covers use of the imido-acid salts as potential building blocks for pharmaceuticals or in polymer materials.

Bara’s research is funded by the U.S. Department of Energy, the National Science Foundation and the American Chemical Society Petroleum Research Fund.