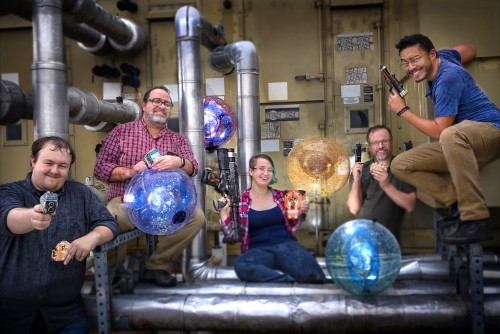 Newswise — A University of Arkansas at Little Rock professor, student, and alumnus have created an app for an exhibit at the Clinton Presidential Center.

The app was built to accompany the “White House, Green Building” exhibit, which is on display at the Clinton Presidential Center from Sept. 8, 2018, to March 24, 2019.

This exhibit explores how the Clinton administration worked to improve the environment, the green building design elements incorporated into the Clinton Presidential Center, and ways to make sustainable living a part of everyday life. The exhibit uses videos, augmented reality games, hands-on interactives, photos, and text to teach about those themes.

The app uses augmented and virtual reality and took more than 100 hours to create. Williams’ favorite part of the app is the homebuilding game, which allows users to virtually build a home to see the environmental outcomes of their choices.

“There are pieces that represent how big the house is, flooring and roofing options, and other choices that can make the house energy efficient,” Williams said. “You encourage people to be cognizant of how these choices change the overall impact that their house has on the environment. The interface gives users a green rating for how well they are doing, and it tells them how much the house will cost. If they make green choices, when they are finished the house will show plants and happy animals. If they choose poorly, you may see acid rain at the end. It gives them a visual representation of the outcomes of their choices.”

Museum Curator Christine Mouw said the app has been a positive addition for the exhibit, and she is hoping to incorporate more apps into future exhibits.

“They were so great to work with and customized the games to fit our exhibit and our ideas, and they taught us so much about what could be done,” Mouw said. “The end product is fabulous. We've gotten so much positive feedback. People are spending a lot more time in the exhibit than they otherwise would, playing the game! I hope we can put games into more of our exhibits in the future.”

In choosing projects for their company to complete, Williams said they look for “games that make a difference in people’s lives.”

“Our unofficial company mission is to design and work with games that have some sort of social impact,” Williams said. “That matters to us. This project ties to an interest in sustaining world climate and livability.”

“The kinds of things we are interested in as a group go beyond games and technology,” Marshall added. “When we can work on a project that has a broader impact, that is meaningful.”