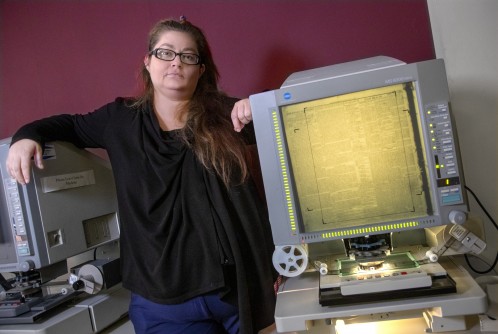 This Nov. 2, 1918, Arkansas Democrat article from the Arkansas Council of Defense Records located in the Arkansas State Archives showcases the different black leaders who worked with the Council of Defense on the Arkansas Colored Auxiliary Council. The leaders of the community were trying to raise a minimum of $400,000 dollars during the month of November. The Auxiliary Council had its first meeting on Aug. 10, 1918, and by November the committee was working hard to rise money for the war effort.

A University of Arkansas at Little Rock graduate student is shedding light on long-overlooked contributions black communities in Arkansas made to the World War I effort.

Crystal Shurley, an archivist at the Butler Center for Arkansas Studies who completed her Master of Arts in public history in December 2018, wrote her thesis on the history of the Arkansas Colored Auxiliary Council, an early archivist group that was active during World War I and has remained a relatively undocumented part of Arkansas history.

“This is an important piece of black Arkansas history that has not been investigated,” Shurley said. “I think it’s important that we remember that history is made by everyone, and not everyone that is a history maker is a white male. Unfortunately, in history we often focus on people who are in the limelight instead of ordinary people who have worked hard to achieve great things and often get no credit.”

For her thesis, Shurley searched through the Arkansas Council of Defense Records located in the Arkansas State Archives. Despite the patriotic efforts of black communities during World War I, their efforts were often seen a potential threat to white authorities.

“Her thesis and website fill a hole in Arkansas history and are timely additions to the scholarship of World War I history in the war’s centennial year,” said Dr. Brian Mitchell, assistant professor of history and Shurley’s thesis advisor. “While scholars know a tremendous amount of information about how Arkansans supported and entertained white World War I recruits and soldiers, very little is known about about how black Arkansans supported black soldiers on the home front. Shurley’s work reveals the patriotism espoused by the black community and the efforts that they made to ensure that their husbands, fathers, and sons who pledged themselves to the war effort would be appreciated and supported by their own.”

The Council of National Defense was established in 1916 to coordinate industries and resources in the event that the United States entered World War I. This national council oversaw investigations of infrastructure, troop movement, supply mobilization, production and distribution of propaganda, organization of civilian population, and the nation’s capability to produce materials.

In a 1918 letter to convince Arkansas to organize the black community, Council of National Defense member Arthur Fleming wrote, “It will also prevent the over-emphasis which would result from different federal agencies approaching the Negroes independently and which, as you can readily see, might create in their minds a disastrous misconception of their importance.”

The Arkansas Colored Auxiliary Council held its first meeting on Aug. 10, 1918. The council was supervised by John Bond, the state education superintendent, and Wallace Townsend, the director of the state council, who reassured state council members by selecting conservative black leaders.

Scipio Jones, a prominent black attorney and former slave who is best known for his defense of 12 black men sentenced to death following the Elaine Massacre of 1919, was appointed as the state chairman of the Colored Auxiliary Council. Another prominent member, Josiah Blount, later became the first black person to run for governor in Arkansas in 1920.

“These men were well-educated leaders in Arkansas’s black communities and the Arkansas Colored Auxiliary Council,” Shurley said. “Townsend and Bond believed that the men of the Colored Auxiliary Council would work within the established social guidelines of appropriate behavior for black men, according to white society in Arkansas, and to some extent they did. These same black men were working within their communities to uplift and change the environment around them.”

The Arkansas State Council of Defense largely excluded the accomplishments of the Arkansas Colored Auxiliary Council from official reports, but Shurley found examples of their accomplishments recorded in the newspapers of the day.

In 1918, the Branch Normal College, now the University of Arkansas at Pine Bluff, signed a contract with the government to train 2,400 black soldiers in mechanical trades. The Daily Arkansas Gazette reported on April 29, 1918, that black communities in Phillips County mortgaged their farm stock to raise money to purchase war bonds. Jones donated $200 to the War Fund Drive in November 1918. Gov. Charles Brough even issued a public statement about the donation to encourage other black people to make similar donations. Local black organizations purchased thousands of dollars of war stamps. Jones and the Mosaic Templars of America, a black fraternal organization established in Little Rock, donated $100,000 to U.S. Secretary of the Treasury Williams McAdoo for World War I.

The contributions of black women were largely ignored in the official reports as well. In the Report of the Woman’s Committee Council of Defense for Arkansas, Shurley noted that just one paragraph in a 72-page report described the work of black women, who were active in food conservation, collecting war savings stamps, Red Cross, health, and child welfare. Black women who volunteered for the Red Cross sewed clothes for American soldiers in special rooms set up by the Mosaic Templars of America since black people were not allowed to work in the same places as white people.

Shurley said that black women at the time were often accused of not working hard enough to support the war effort if they did not also work as domestic help for white families. G.B. Ewing, a white Desha County judge, wrote a letter to the Arkansas Council of Defense about his concerns over the lack of black female domestic labor in Arkansas.

While the “women of the white race have done their utmost to assist in everything about winning the war,” Ewing wrote, “it is impossible to get any domestic help from the negro women in fact they have practically quit work and we find they are being kept up by the increase in earning of the negro men or from allotments obtained from government through enlisted negroes, so vagrancy laws will not reach them.”

“Black women were actually villainized by some in the Council of Defense,” Shurley said. “In some states, there were laws that were put into place that black women had to have a job outside their home in order to force them to work as domestics. The white community felt that their standard of living was getting too high since their husbands were in the war and bringing home a steady paycheck.”

Shurley also created a website about the Colored Auxiliary Council with information about its members, historical records, newspaper clippings, council reports, and correspondence that she hopes others will use to learn more about this group and their contributions to fight World War I.

“Sometimes, we focus on all the horrible things that happen to people of color, and we don’t focus on the amazing contributions they have made to society,” Shurley said. “The Arkansas Colored Auxiliary Council was an incredibly positive influence and force in the black community. They made incredible contributions that they were never recognized for.”

The website will also provide an excellent guide for educators in Arkansas who wish to teach their students about the Arkansas Colored Auxiliary Council.

“Her thesis and website provide a rich tapestry of details regarding the organization of the Arkansas Colored Auxiliary Council, its membership, and its activities,” Mitchell said. “I hope that middle and high school teachers throughout the state will incorporate Shurley’s digital contribution to their lesson plans and classroom discussion of the Great War.”

Caption: This Nov. 2, 1918, Arkansas Democrat article from the Arkansas Council of Defense Records located in the Arkansas State Archives showcases the different black leaders who worked with the Council of Defense on the Arkansas Colored Auxiliary Council. The leaders of the community were trying to raise a minimum of $400,000 dollars during the month of November. The Auxiliary Council had its first meeting on Aug. 10, 1918, and by November the committee was working hard to rise money for the war effort.