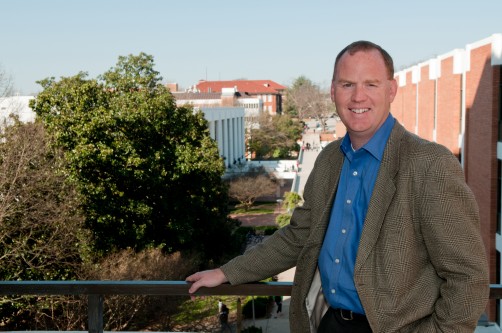 TUSCALOOSA, Ala. — Dr. Andrew Billings, a sports researcher whose academic home is The University of Alabama’s College of Communication and Information Sciences, soon will release a book he believes to be the “first true survey” of fantasy sport leagues in the United States.

Billings, the Ronald Reagan Endowed Chair of Broadcasting in the telecommunication and film department at UA, co-wrote “The Fantasy Sport Industry: Games within Games” with the University of Cincinnati’s Dr. Brody J. Ruihley. The book explores the ins and outs of fantasy sport as an industry game changer.

“Fantasy sport tips the scales for media consumption,” Billings said. “At the most fundamental level, why do people watch sports? They watch to see who wins. In fantasy sports, that’s not the case. You’re rooting for individual players and may not even care at all about which team wins. That changes the most basic equation of sports media research.”

The book includes data from surveys of more than 1,000 fantasy sport players, interviews with industry leaders and provides a history of fantasy sport. Billings said around 35 million Americans play fantasy sports each year, even more than the number of people who have active Twitter accounts.

Billings said perhaps the most significant finding in the book relates to player motivation.

“We tested different motivations for why people play — reasons such as to be entertained, or for camaraderie,” Billings said. “On every single motivation but one, fantasy sport is higher than just an average sport fan who doesn’t play fantasy sport. The only motivation that doesn’t go higher is escape, which actually goes down if you play a fantasy sport. Sports often are an escape from work, family and everything, but because fantasy sports tend to be played with family or friends from work, it no longer represents an escape.”

The number of fantasy sport players in the U.S. has doubled in the past seven years, and Billings said the fantasy-league reach is surprising, with leagues for everything from what bills will pass in Congress to which movies will succeed in Hollywood.

“It’s that desire to control your own destiny,” Billings said. “Fantasy feeds the notion that you may not have the skills to be Kobe Bryant, but you have the skills to be a general manager. It’s Seinfeld’s George Costanza sitting in his office wheeling and dealing to make the trades that he thinks will make the Yankees the best team.”

Billings also said higher National Football League ratings correlate to fantasy league play, and DirectTV has even created a RedZone Channel, which allows fantasy players to watch games across the league that are at a crucial point, typically with one team likely to score.

Other interesting findings from Billings’ research include the percentage of people who root for a fantasy team over their favorite NFL team (41 percent) and the fact that a very high percentage of people surveyed indicate that they intend to continue playing in fantasy sport leagues until they die.

“The Fantasy Sport Industry: Games Within Games” will be available from Amazon, Barnes & Noble and other retailers Sept. 9.