3-May-2017 3:05 PM EDT, by University of Alabama at Birmingham
favorite_border 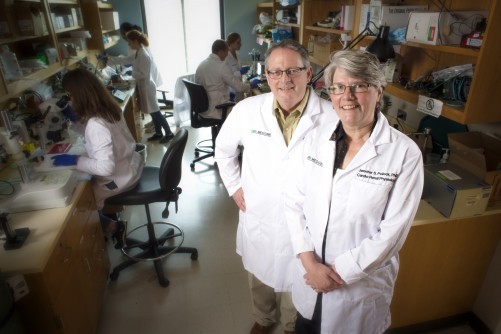 University of Alabama at Birmingham researchers David Pollock, Ph.D., and Jennifer Pollock, Ph.D., were awarded a $11.2 million grant to further investigate how the body regulates salt. A high-salt diet is believed to contribute to the rise of many diverse health problems, including autoimmune disease.

“We know that the Western diet we all eat has far too much salt in it, and we know the number of people consuming salt in Western and developing countries is rising,” David Pollock said. “Evolutionarily speaking, we didn’t have bountiful salt in the diet until just in the last 100 years. But physiologically, we are designed to conserve salt. We haven’t evolved to handle these high-salt diets we’re eating. Now that it’s become appreciated that a high-salt diet may contribute to the rise of many diverse health problems including autoimmune disease, trying to understand how the body regulates salt is extremely important, and that’s the work we hope to continue to do with this grant.”

P01 grants are more complex in scope and budget than the individual R01-type research grant. While individual research grants are awarded to support the work of one principal investigator who, with supporting staff, is addressing a scientific problem, P01 grants are available to a group of several investigators with differing areas of expertise who wish to collaborate in research by pooling their talents and resources. Program project grants represent synergistic research programs that are designed to achieve results not attainable by investigators’ working independently.

The P01 grant is organized around a set of closely related projects bearing on a well-defined scientific problem. Normally, a P01 grant includes three to five projects, one administrative core, and optionally one or more shared research cores. The labs of Jennifer and David Pollock are two of the projects for this grant, along with Inscho’s lab. Donald Kohan, M.D., Ph.D., from the University of Utah is the project principal investigator for the other.

“David and Jennifer’s research will provide seminal insights into the control of sodium excretion and the role of the kidney in blood pressure regulation, specifically the role of endothelin in regulating circadian rhythms and blood pressure,” said Anupam Agarwal, M.D., the Marie S. Ingalls Endowed Chair in Nephrology, executive vice dean of the School of Medicine and director of the Division of Nephrology in the Department of Medicine. “The Pollocks’ research team, which includes investigators from the University of Utah and University of Texas at San Antonio, demonstrated a high level of productivity during the prior funding cycle of this Program Project, and we are delighted to see that they were able to successfully renew this important program.”

Eating salt raises the amount of sodium in one’s bloodstream and upsets the delicate balance the body needs, reducing the ability of the kidneys to remove the water. The result is a higher blood pressure due to the extra fluid and extra strain on the delicate blood vessels leading to the kidneys. This is significant as more than 75 percent of the sodium Americans eat comes from some processed, prepackaged and restaurant foods — not from the salt shaker — according to the American Heart Association.

The Food and Drug Administration released a draft of the first-ever voluntary sodium targets in the summer of 2016 that set limits on how much sodium should be in certain foods, a historic announcement that encouraged food companies and restaurants to lower sodium levels. The recommendation by the FDA is that no more than 2,300 milligrams are consumed a day, with an ideal limit of no more than 1,500 milligrams per day for most adults. However, the average American eats more than 3,400 milligrams of sodium each day, underscoring the importance of pinpointing how the body processes salt.

Previous research
With the Pollock’s previous grant into renal control of salt, they have shown that there is a small peptide made by the kidney and in the lining of the blood vessels and renal tubules that helps the body get rid of salt. When there is damage in that system, it can contribute to hypertension and atherosclerosis. This grant will now look at other aspects of salt intake on the body, including a focus on how blood pressure is controlled throughout the day.

For example, one of the previously unrecognized problems with hypertension is that some who have normal blood pressure during the day may not see it drop at night as it is supposed to do. This leads to nocturnal hypertension. This research now will look at the time of day salt is consumed to see how it affects nighttime blood pressure.

“We have some evidence that there are genetic causes,” David Pollock said. “Our kidneys are designed to not excrete salt or make urine during the night. They’re designed to retain salt, which is not good if you are eating too much. We’re trying to figure out what controls the day versus night ability.”

Pollock also will look at the differences in how men and women retain and process salt. Current research has shown that men are more susceptible to the damaging effects of salt compared to premenopausal women.

Jennifer Pollock’s UAB lab will investigate the relationship between the endothelin system and nitric oxide, specifically enzymes that can control the ability of the endothelin system to regulate salt excretion by the kidneys. These studies may help explain how environmental factors could interact with genetics to make some individuals more susceptible to salt-induced hypertension.

Inscho is also a co-investigator on both Jennifer and David Pollock’s projects and will add another dimension to this investigation by examining how the renal vascular system changes in the model systems developed by the two Pollock labs. His work on the previous grant uncovered a novel means by which the endothelin system changes vascular function under high-salt conditions.

David Pollock believes the combined research power of the labs involved in the grant will make the overall investigation into renal control of sodium successful — a major reason the group was funded by the NHLBI.

“This is a unique idea, which the NHLBI considers when making a decision to fund these types of grants,” Pollock said. “We have a track record that makes the National Institutes of Health confident we will be able to get this done. The real advantage of this kind of grant is that you have these three well-established laboratories, each with different ways of thinking. It really creates a back-and-forth kind of synergy that makes these types of research opportunities quite promising.”

About UAB
Known for its innovative and interdisciplinary approach to education at both the graduate and undergraduate levels, UAB is an internationally renowned research university and academic medical center and the state of Alabama’s largest employer, with some 23,000 employees and an economic impact exceeding $5 billion annually on the state. The five pillars of UAB’s mission deliver knowledge that will change your world: the education of students, who are exposed to multidisciplinary learning and a new world of diversity; research, the creation of new knowledge; patient care, the outcome of ‘bench-to-bedside’ translational knowledge; service to the community at home and around the globe, from free clinics in local neighborhoods to the transformational experience of the arts; and the economic development of Birmingham and Alabama. Learn more at www.uab.edu.