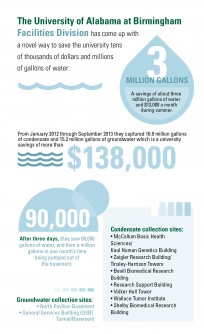 Newswise — The University of Alabama at Birmingham has come up with a novel way to save the university tens of thousands of dollars and millions of gallons of water. The Facilities Division created a network of tanks and piping that captures and uses ground water and condensate from cooling systems.

“There’s no magic to it,” said Matt Winslett, engineering manager in the Department of Energy Management. “It’s brutally simple.”

The work of UAB Energy Management has been featured this year in both Facilities Manager and District Energy magazines. It all started when Winslett was looking at the condensate forming and flowing from an air handler and thought, “Wouldn’t it be neat if we could run that water back into the chilled water return line?”

At first, Winslett and his team — Dwight Lee, manager of chilled water plant operations, and Brad Gwin, engineer II of energy management — thought it might not be possible; but they worked with the campus and hospital maintenance departments to figure out a way.

UAB has three central cooling plants along with multiple cooling towers that are linked via a network of underground piping. Water from these plants is cooled down to 45 degrees Fahrenheit. The heat is removed from the water through an evaporative process that occurs within the plant’s cooling towers. The water is then piped into buildings on campus and used for air conditioning.

After being used, the then warmer water leaves the buildings at about 55 degrees Fahrenheit and creates condensate that forms on the air handler coils. Previously, this water had been collected and discarded into a nearby storm drain. That water is now collected, filtered, cleaned and pumped into the cooling tower through the chilled water return line, reducing the makeup water that must be purchased.

The condensate is cold, clean and distilled, and the central plant underground cooling loop is treated with chlorine dioxide strong enough to kill anything harmful and safe enough to treat a drinking water system. Instead of purchasing municipal drinking water solely for cooling, UAB is now able to use recycled condensate water and save big.

“No one else is doing it to this scale,” Winslett said. “There are other organizations that recycle condensate and use it to water gardens and for irrigation, but nothing like what is being done at UAB.”

In addition to condensate, the facilities crew also discovered buildings that are a source for ground water. For years, the buildings in question have pumped water around the clock, preventing floods. Winslett and his team now collect that water.

“What was a liability is now an asset,” Winslett said.

Graduate student Atul Kajale, who is from India and is pursuing his doctorate in civil engineering, has worked on the project for more than a year. With a goal to develop a formula that will predict how much water will be collected based on local weather conditions, he has logged the minute-to-minute flow of these systems using meters on the collection tanks.

Kajale says working alongside the facilities team has been a priceless experience. He plans to work in water resource management after he graduates.

So far, seven buildings have been outfitted for condensate collection and two for gathering ground water. There are plans to add the system to a new dorm, and it is being considered for the coming student center.

Both systems require very little maintenance. With system costs of $30,000 to $50,000, depending on the size of the building and system type, condensate return systems offer an average three-year payback. So far, the ground water systems are paying back in less than one year.

Ultimately, the goal is to recapture 25 to 30 percent of the water being purchased. UAB is exploring the feasibility of a patent so others can model the system.

“We are doing some of the neatest things anywhere in water recovery,” Winslett said. “It speaks volumes as a university that they support this effort.”

In the winter, when the condensate goes away, the water tanks are cleaned, and filters are changed.