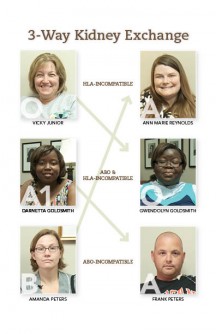 This graphic shows the blood type for each of the patients involved in the three-way kidney swap. It also shows the incompatibilities and how UAB physicians were able to arrange the transplants. 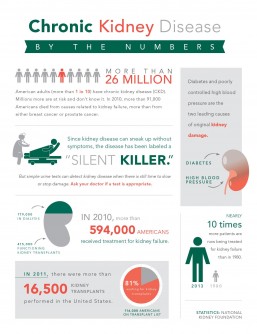 Newswise — BIRMINGHAM, Ala. - Ann Marie Reynolds, a 32-year-old who has been in and out of hospitals fighting chronic kidney disease since she was a teenager, had a less than 1 percent chance of receiving a kidney without the University of Alabama at Birmingham's groundbreaking organ donation system that helped her and two other hard-to-match patients get kidneys in a three-way, incompatible kidney exchange earlier this year.

Even though UAB's incompatible transplant, desensitization program sometimes allows a transplant between a donor and recipient with different blood types, blood-type and tissue incompatibility can be barriers to a successful donor-recipient match. UAB's paired exchange and incompatible transplant programs are used in tandem to enable physicians and surgeons to identify and connect living organ donors with recipients and improve a recipient's ability to accept an organ with which he or she may otherwise have been incompatible.

UAB has been collecting incompatible donor-recipient pairs in a database and has the ability to identify connections among incompatible pairs to enable two or more recipients to be transplanted. UAB is one of three locations in the nation, and the only one in the Southeast, able to do this as a single center.

The UAB program began in earnest earlier this year, and by the end of 2013, UAB is expected to complete 28 to 30 paired exchange and incompatible kidney transplants as part of the program.

Bob Gaston, M.D., the Robert G. Luke, M.D., Endowed Chair in Transplant Nephrology in UAB's School of Medicine, says the programs will give more patients like Reynolds an opportunity that they otherwise might not have had.

“There was a time when, even if you came here with a willing donor, but you didn't match, that was the end of the story,” Gaston said. “Approximately half of the people who contacted UAB and wanted to be a living kidney donor were incompatible with their recipient. We had to turn down willing donors. That's much less likely to happen now with this program. We have expectations that the numbers will grow substantially next year and in the coming years.”

Jayme Locke, M.D., Reynolds' surgeon and the assistant professor of Surgery and Abdominal Transplant Surgery in the School of Medicine, says incompatible transplantation is an important innovation.

“We're fortunate here at UAB to be able to combine a paired exchange program with our desensitization program, and as a result, we're a bit unique in the Southeast because we're the only center that offers that at the moment.”

Reynolds was able to bring in Vicky Junior, her sister's mother-in-law and fellow Anniston, Ala., native, a donor who did not match her, but did match with Hayneville, Ala., native Gwendolyn Goldsmith. Goldsmith's donor on her behalf was her sister Darnetta Goldsmith, whose donated kidney was given to Rockwood, Tenn., native Frank Peters. Peters' donor on his behalf was his wife, Amanda, whose donated kidney went to Reynolds.

This delicate dance was made possible because of extraordinary treatments and skills developed and honed by teams of surgeons, physicians and researchers in UAB's Kidney/Pancreas Transplant Program and the giving hearts of each of the donors.

“It's like Vicky told me - she wasn't doing this just for me,” Reynolds said of Junior. “She was doing this because it helps other people, too. As a living kidney donor, this is what you can do for others. You can help multiple people. When you do, you're giving them life again. And the great thing is, all of this can be done right here in Alabama at UAB.”

New technologies evolved that enabled researchers and clinicians to specifically define harmful antibodies that are present in many previously transplanted patients. Vera Hauptfeld, Ph.D., director of the histocompatibility laboratory, was instrumental in making sure UAB was at the cutting edge in implementing these technologies that make it possible to measure how strong a patient's antibody response is. Then, that response can be eliminated or avoided, or its impact can be reduced by novel treatments.

“This was groundbreaking stuff that very, very few hospitals in the country were able to execute when we began putting our foundation in place 10 years or more ago,” Gaston said. “We knew we needed this program because of the real need for kidney transplants in the state of Alabama; our waiting list is enormous. Plus, we have people from Mississippi, Florida, Georgia and Tennessee coming to us for transplantation. I have long referred to UAB as the Transplant Center of the South, and our capabilities have increased immensely due to the hard work and dedication of many of our researchers and physicians.”

Vineeta Kumar, M.D., an associate professor of Medicine in the Division of Nephrology, has spent many days in UAB's histocompatibility lab in an effort to translate the advances in understanding antibodies to the clinical arena.

Kumar helped clinicians understand what these new tests meant, and she was instrumental in the clinical efforts at UAB as the new tests became more widely available. Jeremy Goodman, M.D., assistant professor of Surgery, also worked with Kumar to get some of the necessary testing off the ground in developing the laboratory support needed to make these incompatible kidney transplants possible.

All of this has led to possibilities in other areas, too. Because Kumar can translate what happens in the laboratory to the clinical arena, she has become the go-to person for the heart, lung and liver services as they develop the expertise to transplant in similarly difficult cases.

“The efforts made by Dr. Kumar have been monumental for all our transplant programs,” Gaston said.

Once the infrastructure was in place, UAB began recruiting a surgeon with hands-on experience with incompatible transplantation. Devin Eckhoff, M.D., director of UAB's Division of Transplantation, found Locke at Johns Hopkins Hospital in Baltimore.

“We believed strongly she was the right choice,” Eckhoff said. “Dr. Locke had a lot of experience at one of the leading centers in the country in paired kidney exchange and transplanting in people who were highly sensitized. She was there from its inception, completing her residency and fellowship there with two of the world's leaders in those specialized programs.”

Team effortThe potential complications of a three-way kidney swap are pre-empted by an intense focus that begins many weeks prior to transplant day, with Kumar, Locke and others sifting through a UAB-built database to find potential matches.

On the day of transplant, a team of more than 30 people in UAB Hospital makes the transplants possible for each patient. A team leader coordinates three operating rooms and provides doctors and nurses with the instructions on which donated kidneys go to which recipients.

There are a lot of machines involved - laparoscopic machines, positioning equipment, surgical instruments. The operating room team is crucial to the success of the surgery. There are eight nurses, at least three anesthesiologists, and workers from the Alabama Organ Center to help package and deliver the kidneys.

All of the donors go back to their respective operating rooms at the same time, and all of the extractions are done at the same time. The recipients are brought back to receive their new kidney one at a time, depending on which donor kidney is extracted first.

In all, the process for the incompatible three-way swap on this day takes almost 14 hours. It is a procedure that patients in the United States cannot receive at just any hospital. It makes the time and effort put into each patient worthwhile.

“This process is like a roller coaster in so many ways,” Kumar said. “I'm the type of physician who gets excited when a fingernail heals. There are so many hurdles to jump over leading up to the surgery and after each one with its own highs and lows. We invest our heart and soul into every patient we have, and this kind of surgery involves a huge portion of the UAB Health System - from the transplant teams to the histocompatibility lab to the hematologists to the blood bank to the surgery teams to the operating room staff to the floor nurses. It's amazing how everybody is willing to help. And anytime we can help a patient have a successful transplant, it is hugely satisfying. It makes up for the many sleepless nights.”

To become an organ donor altruistically or upon death, visit http://www.organdonor.gov/index.html and sign up today.

About UABKnown for its innovative and interdisciplinary approach to education at both the graduate and undergraduate levels, the University of Alabama at Birmingham is an internationally renowned research university and academic medical center and the state of Alabama's largest employer, with some 23,000 employees and an economic impact exceeding $5 billion annually on the state. The five pillars of UAB's mission include education, research, patient care, community service and economic development. UAB: Knowledge that will change your world. Learn more at www.uab.edu.