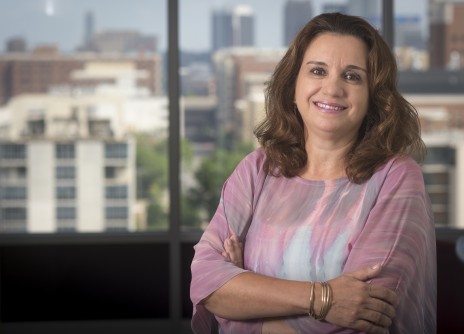 Isabel Scarinci, professor in the UAB Division of Preventive Medicine, hopes to foster and promote relationships between the state of Alabama and Brazil in business, economics, education, cultural arts and other areas.

Newswise — BIRMINGHAM, Ala. – Isabel Scarinci, Ph.D., professor in the Division of Preventive Medicine in the University of Alabama at Birmingham School of Medicine, has been appointed honorary consul for Brazil for the state of Alabama. Her appointment was recently confirmed by the U.S. Department of State.

The Brazilian Consulate in Atlanta approached Scarinci, a UAB graduate, about the position. The Brazilian government gave its clearance, and the U.S. Department of State made Scarinci’s appointment official.

“Essentially, my role is an extension of the Brazilian Consulate in Atlanta to better serve the Brazilian citizens in Alabama,” Scarinci said. “I will also seek to foster and promote relationships between the state of Alabama and Brazil in the areas of business, economics, education, cultural arts and other areas. It’s an exciting opportunity, and one that I hope will benefit Alabama and Brazil.”

The Brazilian Consulate approached Scarinci about this honorary position in large part because of her involvement with the immigrant population in Alabama.

Scarinci has had funding from the National Institutes of Health and organizations like Susan G. Komen for the Cure to develop and implement interventions to promote cancer screening and tobacco control among African-Americans and Latino immigrants. She also successfully used the community health adviser model to train lay Latino and African-American individuals in health promotion, disease prevention, adoption of healthy behaviors and development of community resources for improved health, as well as to decrease health disparities.

For more than 10 years, she has implemented a program to provide low-cost or free breast and cervical cancer screening, follow-up, and treatment for Latina immigrants by building strong and lasting partnerships between UAB, the surrounding hospitals and the community. Through this program, more than 2,000 immigrants have received these cancer screenings.

Scarinci played a prominent leadership role in establishing the first mentoring program for Latino students at UAB, called Manos Juntas, or Helping Hands. In addition, she also has a leadership role to enhance the UAB Minority Health and Research Center activities for the Latino population. Based on the lessons learned in Alabama, she has successfully expanded these efforts to Brazil, where she has been developing research and infrastructure for cancer prevention and control in partnership with Brazilian universities, local governments and civil society.

“Dr. Scarinci leads the UAB Minority Health and Health Disparities Research Center Training Program, which develops a pipeline of minority students pursuing a career in biomedical research,” said Mona Fouad, M.D., director of the UAB Division of Preventive Medicine. “She has carved out an area of service to UAB and the community that is truly unique, and this appointment attests to the value of her remarkable contributions. Her new role as the honorary consul for Brazil for the state of Alabama adds to the deservedly positive image that UAB has garnered locally, nationally and internationally.”

Scarinci also was recently appointed associate director for Globalization and Cancer in the UAB Comprehensive Cancer Center by Edward Partridge, M.D., the center’s director. Her appointment by the cancer center’s senior leader marks an effort to be more programmatic and proactive in its globalization efforts. Scarinci anticipates that her role as honorary consul will benefit the UAB Comprehensive Cancer Center and both the United States and Brazil.

“Being appointed the honorary consul of Brazil formally opens doors for collaborations with a country that we can learn a lot from with regard to cancer prevention and control,” Scarinci said. “For instance, Brazil has one of the best regulatory agencies in the world with regard to tobacco control. On the other hand, Brazil is still in the process of building research infrastructure in cancer prevention and control, and we can play an important role in sharing our experiences and lessons learned.”

Studies have shown that globalization has a major impact on health; people are moving more freely, and new health issues emerge locally and globally, Scarinci says.

“Locally, they can be related to Latino immigrants’ arriving and settling in great numbers in a state such as Alabama that is unprepared to receive this population,” Scarinci said. “Globally, they may represent opportunities for a leader in health care, education and research, such as UAB, to partner with other countries to address relevant global health issues such as cancer control and prevention.

“I have been fortunate to work in both arenas, and my vision is for the UAB Comprehensive Cancer Center to be a leader in globalization and addressing cancer disparities by expanding the infrastructure that we already have. We have amazing investigators and staff from basic to population science willing to share their knowledge and skills with other countries, and they are willing to learn from these countries so we can better serve our people in the United States.”

Scarinci serves or has served on numerous boards, including The Women’s Fund of Greater Birmingham, the United Way of Central Alabama, Girl Scouts and Oasis — A Women’s Counseling Center. She also was awarded the 2007 UAB Odessa Woolfolk Community Service Award for her community service efforts.