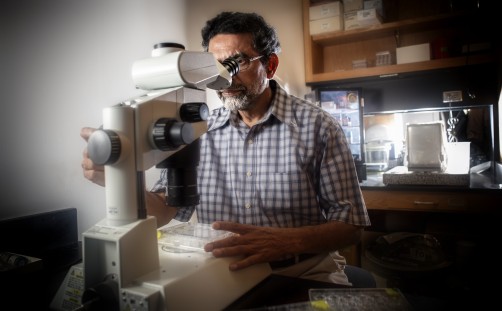 Newswise — BIRMINGHAM, Ala. – New research from the University of Alabama at Birmingham School of Optometry will study the transmission of a bacteria that up to 40 percent of healthy women carry, which becomes deadly when passed on to infants during birth.

Narayana Sthanam, Ph.D., professor of structural biology in the Department of Optometry, has been awarded a four-year, $1 million R01 grant from the National Institute of Allergy and Infectious Diseases, part of the National Institutes of Health, to further Group B Streptococcus research.

GBS is the leading cause of sepsis, pneumonia and meningitis in a newborn’s first week of life, according to the Centers for Disease Control and Prevention.

“Even after extensive preventive screening and treatment of expecting mothers, GBS infects a considerable percentage of neonates, as around 25 percent of mothers pass the GBS pathogen to infants during birth,” Sthanam said. “It becomes responsible for significant neonatal mortality around the world, and no vaccines are available against GBS infections.”

This new research, “Complement evasion by Group B Streptococcus,” will address how GBS escapes the mother’s complement system, which helps to clear disease-causing pathogens like GBS from the host.

“The complement system is our first line of defense against invading pathogens,” Sthanam said.

Sthanam adds that this study will also address how to use the knowledge of GBS interactions with complement proteins as an aid for a quick and reliable diagnosis of GBS infection, and for therapeutic intervention.

“The complement system is a major effector arm of innate and adaptive immunity against invading pathogens,” Sthanam said. “Upon activation, it facilitates rapid elimination of the pathogen, but sometimes becomes complicit and cooperates in its survival leading to life-threatening infections. A credible explanation of how GBS escapes from the human complement will provide the needed input for a therapeutic intervention.”