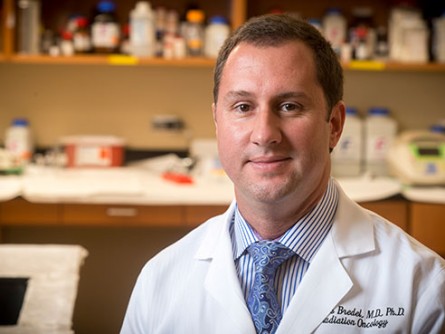 Glioblastoma multiforme, the deadliest and most common form of malignant brain tumor, is “probably one of the most aggressive human cancers,” says Markus Bredel, M.D., Ph.D., professor in the UAB Department of Radiation Oncology and senior scientist in the neuro-oncology program at the UAB Comprehensive Cancer Center.

•Read this story at www.uab.edu/news

Newswise — BIRMINGHAM, Ala. – Researchers at the University of Alabama at Birmingham have identified a strategy that highly aggressive brain tumor cells use to fuel their relentless expansion.

In a study published online in The Journal of Clinical Investigation on May 27, Markus Bredel, M.D., Ph.D., professor in the UAB Department of Radiation Oncology and senior scientist in the neuro-oncology program at the UAB Comprehensive Cancer Center, and colleagues demonstrate that a phenomenon known as “alternative splicing” allows brain tumors to incapacitate a key tumor suppressor gene, and that this splicing event happens in a tissue-specific context.

Alternative splicing involves the beading together of different parts of a gene. In this case, Bredel and his co-authors discovered that a specific spliced form of the membrane-binding tumor suppressor annexin A7, or ANXA7, leads to the decreased breakdown of a receptor, EGFR, that contributes to the growth of tumor cells.

Brain tumors are a serious medical problem with few options for a cure or effective long-term treatment. Glioblastoma multiforme, the deadliest and most common form of malignant brain tumor, is “probably one of the most aggressive human cancers,” Bredel said.

Almost all glioblastomas exhibit excessive activation of the EGFR pathway. In previous papers published in The Journal of the American Medical Association, Bredel’s team had discovered that higher levels of EGFR were associated with a loss of the ANXA7 gene. Further research convinced the scientists that ANXA7 keeps EGFR in check by marking it for degradation by the cell.

“So it’s to the benefit of the tumor cell to knock down these regulators,” Bredel said. “EGFR is the ‘bad guy’ in cancer cells,” Bredel explained. “And ANXA7 is the police; in usual conditions, it constrains EGFR. But when that police force is gone, the bad guy can do what he wants.”

The new study reveals what happens to ANXA7 — and introduces a fresh target for cancer therapy: PTBP1. This “splice factor” snips out a crucial part of the ANXA7 gene, compromising its function. Intriguingly, Bredel and colleagues found that in the brain this process happens in stemlike precursor cells that represent potential cells of origin of glioblastoma but not in mature neuronal cells, suggesting that glioblastoma cells inherit the splice trait from a potential tumor-initiating ancestor, and that these cells further exploit this trait through accumulation of mutations that enhance EGFR signaling.

The researchers demonstrated that PTBP1 is overexpressed in animal models of glioblastoma; they also found the same thing in tissue samples from human patients.

“We showed that when you have elevated PTBP1 levels in a tumor, brought about in part by amplification of the PTBP1 gene, it portends the worst prognosis for the patients,” Bredel said. Bredel’s lab is now searching for effective inhibitors of PTBP1. This may be a more promising avenue for therapy than trying to boost ANXA7 levels, Bredel says.

“Restoring tumor suppressor genes in cancer patients has proved to be a very difficult process,” he said. “Finding something that is upregulated in a cell, such as PTBP1, and inhibiting it is much easier.”

Understanding how brain tumors form in the first place, “and what causes their progression or ‘aggressiveness,’ will allow cancer researchers to develop novel and improved treatments for this disease,” Bredel said. “We hope these studies provide new avenues for treatment of glioblastoma, while improving our understanding of the fundamental process of how the cancers form and progress.”

This study was supported in part by the National Institutes of Health Specialized Programs of Research Excellence (SPORE) grant in brain cancer at UAB.