The Parker Solar Probe’s SWEAP instrument suite directly samples the solar wind and was built by a partnership between UAH, NASA’s Marshall Space Flight Center and the Smithsonian Astrophysical Observatory. 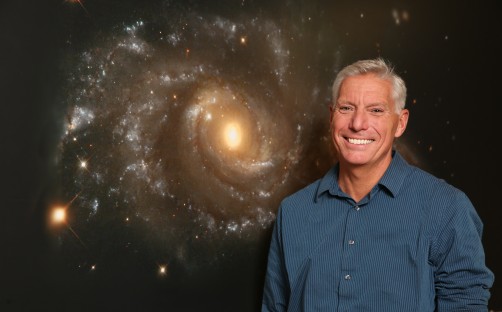 Dr. Gary Zank has been one of the primary developers of the two competing theories to explain the heating of the corona based on the dissipation of magnetic turbulence generated by the sun.

Newswise — HUNTSVILLE, Ala. (Dec. 14, 2021) – Scientists are closer to solving a solar heating puzzle using direct data now that NASA’s Parker Solar Probe (PSP), on which The University of Alabama in Huntsville (UAH) teamed to develop an instrument suite to directly measure particles from the solar wind, has for the first time entered a region never before explored.

PSP has glimpsed the part of the solar wind close to the sun in which waves move more rapidly than the wind itself, says Dr. Gary Zank, director of the Center for Space Plasma and Aeronomic Research (CSPAR) at UAH, a part of the University of Alabama System, and coauthor of a paper about the achievement published in the American Physical Society journal Physical Review Letters.

“It has now made the first observations, perhaps a little sooner than expected, since we are still well away from closest approach,” says Dr. Zank, the Aerojet-Rocketdyne Chair in Space Science who played a significant role in proposing and developing the PSP mission, as well as in development of the Solar Wind Electrons Alphas and Protons (SWEAP) instruments aboard.

The achievement checks off one of the major goals of the PSP mission and is crucial to scientists utilizing direct observational data to answer the question why the solar corona is mysteriously heated in the region the probe has now reached.

“For over 50 years, since the dawn of the space age, the heliospheric community has grappled with the unanswered problem of how the solar corona is heated to well over a million degrees to drive the solar wind,” says Dr. Zank, who has been one of the primary developers of the two competing theories to explain the heating of the corona based on the dissipation of magnetic turbulence generated by the sun. SWEAP was designed and created to directly sample the solar wind in a partnership between UAH, NASA’s Marshall Space Flight Center (MSFC) and the Smithsonian Astrophysical Observatory (SAO). It is one of four instrument suites aboard PSP as it circles the sun in ever-tighter daisy-petal orbits, periodically dipping through an extremely energetic and hot environment. SWEAP’s Faraday cup is the only instrument aboard that is directly exposed to the solar wind.

“The first measurements of the sub-Alfvenic solar wind may represent the most major step forward in understanding the physics behind the acceleration of the solar wind since the formative model by Dr. Parker,” says Dr. Zank, who is also a University of Alabama Board of Trustees trustee professor, an eminent scholar and distinguished professor, and a member of the National Academy of Sciences (NAS). Dr. Eugene N. Parker, for whom the probe is named, predicted the existence of the solar wind in 1958.

Technically, PSP has ventured below what is known as the Alfven surface, the boundary in the solar corona that identifies where the solar wind speed changes from a flow that is moving at less than the speed at which magnetic waves propagate to one that moves faster than the Alfven speed.

Dr. Zank says to think of the Alfven speed as the magnetic analogue of sound waves, so PSP is now making measurements of a region where all parts of the flow can, in a sense, communicate information to all other parts of the flow. That’s completely unlike the region of the solar wind that we are familiar with, he says.

“The latter region is where we live. In other words, all the solar wind that humankind has explored lies in the super-Alfvenic region,” says Dr. Zank.

“For the first time, we have glimpsed the part of the solar wind close to the sun in which waves move more rapidly than the wind.”

Flows that move more slowly than the waves they carry behave quite differently than a flow that moves faster than the sound waves it carries. In slower flows, waves can reach all parts of the flow and serve to telegraph obstacles, boundaries and distances to the slower wind. Fast moving flows swiftly carry waves along, so they don’t spread as widely and can never telegraph what lies ahead.

“Because information can be communicated everywhere in slow moving flows, the flow can adjust to the different conditions,” Dr. Zank says. “This is the sub-Alfvenic region, where the magnetic field dominates and the flow adjusts to the conditions imposed by it. This makes this region quite different from the super-Alfvenic solar wind that pushes the magnetic field wherever it wishes.”

Researchers have a particular interest in this region because in it the solar corona is unexpectedly heated.

“Basically, something strange happens that increases the temperature of the gas at the surface of the sun from 6,500 Kelvin to well over 1 million degrees,” Dr. Zank says. “What happens in this region that causes this to happen?”

Scientists have begun looking at the nature of the region’s turbulence to try and understand the differences between turbulence there and in the more distant solar wind, and whether that will provide insights into the heating phenomenon.

“This is one direction that we're already pushing into. The basic physics of sub-Alfvenic flows is largely unknown, so observations, theory and simulations will all be brought to bear on elucidating the nature of this novel region,” Dr. Zank says.

“This event is what many heliophysicists have dreamed about for most of their careers!" he says. “We can now make the measurements that will help answer this question – one that has defied answer since the dawn of the space age.”