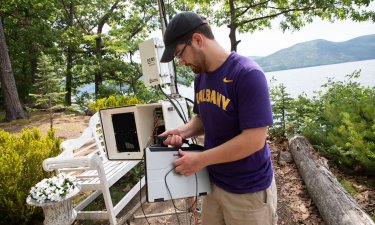 Newswise — ALBANY, N.Y. (July 7, 2021) — As the United States aims to meet 100 percent renewable energy goals by 2050, there’s a massive, underutilized energy source that can help it get there – offshore wind.

According to a 2016 report from the U.S. Department of Energy’s (DOE’s) National Renewable Energy Laboratory (NREL), the U.S. has the technical potential to produce more than 7,200 terawatt-hours (TWh) of electricity from offshore wind, nearly double the nation’s current annual electricity use. However, the amount of atmospheric data readily available around ocean-based wind resources is limited, especially at the heights that turbines must operate.

A new collaborative project led by researchers at the University at Albany Atmospheric Sciences Research Center (ASRC) could soon offer a new approach to tap into this vast amount of renewable energy.

The collaborative project, in partnership with DOE’s Pacific Northwest National Laboratory (PNNL) and funded through $500,000 in support from DOE, aims to design, install and deploy a buoy-based flux measurement system that will be integrated with DOE’s existing floating lidar buoys. The technology monitors air-sea interactions over open water, which provides valuable insight on offshore wind conditions and improves forecast models for decision-making.

“Buoys supporting wind energy generally do not have the ability to directly measure the turbulent exchange of energy between the atmosphere and the ocean,” said Will Shaw, who leads the Wind Energy Program at PNNL. “Yet this information is essential to improving our accuracy in modeling winds that fuel offshore wind power production.”

“The feasibility of this project was determined through conversations at the 2020 AMS Annual Meeting,” said Jeff Freedman, a research associate at ASRC and project co-director. “We believe this novel, state-of-the-art system will facilitate broader use of buoy-based measurements, particularly with a rapidly growing U.S. offshore wind market.”

Along with DOE, ASRC researchers are working on the project with peers from The Jefferson Project at Lake George, as well as researchers at Cornell University and Hobart and William Smith Colleges.

The Jefferson Project — a collaboration between IBM Research, Rensselaer Polytechnic Institute and The FUND for Lake George — uses advanced science and technology, including monitoring, modeling and experimentation, to understand the impact of human activity on freshwater.

“The Jefferson Project team is pleased to collaborate with the ASRC researchers to facilitate their research while also obtaining key data that will improve our weather models, leading to enduring protection of freshwater lakes throughout the region,” said Jefferson Project Director Rick Relyea.

Floating lidars have grown in popularity over recent years and are now commercially available to make offshore wind measurements at heights between 50 and 300 meters. There’s also a number of published research studies on the use of eddy covariance (EC) flux measurements to monitor air-sea interactions close to the surface. But, the two have never been offered as a single package on a buoy platform.

By combining approaches, the “flux-lidar” buoy will provide continuous data every 15 to 30 minutes on a number of atmospheric surface fluxes such as heat, momentum and moisture, while also observing wind speed and direction profiles at heights of several kilometers above sea surface. If successful, this new measurement system could be offered for research and commercial applications in a variety of marine environments.

“We’re essentially combining two different buoy-based technologies that are both somewhat developed, in turn collecting information on a series of atmospheric variables that are accessible and useful to our partners,” said Scott Miller, research associate at ASRC and project co-director. “It’s in the proof-of-concept phase right now, but if the integration works, this new measurement system will offer real value for the next generation of offshore wind turbines.”

The first phase of field testing started in June on Lake George in Upstate New York. It is focused on the design and deployment of the EC flux measurement system along with a 3D scanning lidar. ASRC researchers are using a 24-foot pontoon boat that has been modified for flux measurements. Partner researchers from Hobart and William Smith Colleges and Cornell University are also leading field tests on Oneida Lake and Seneca Lake in Central New York this summer.

A second phase will include buoy-based coastal ocean field testing, with the eventual goal of integrating the EC flux measurement system onto DOE’s floating lidar buoys, which are managed by PNNL.

Both undergraduate and graduate student researchers are supporting the project.