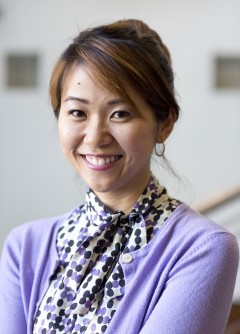 Newswise — In an effort to reduce cancer health disparities among Asian-Americans, UC Davis Comprehensive Cancer Center now offers individual, in-language education and culturally sensitive materials for every Asian-American cancer patient. Debuting during the National Minority Cancer Awareness Week April 13-19, the new brochures and five-minute videos are designed to inform Asian-Americans about the importance of engaging in cancer research. The educational efforts also are part of the Asian-American Cancer Education Study (AACES), a UC Davis program aimed at increasing awareness of clinical trials and the importance of donation of biospecimens such as blood, saliva or tissue.

Asian-Americans’ involvement in clinical trials and biospecimen donation is crucial because Asian-Americans are consistently underrepresented in cancer research. Studies show that language barriers, mistrust of the medical system and cultural differences often create misunderstandings about the nature and purpose of clinical trials and biospecimen donation, discouraging participation.

“Asian-Americans are the only racial group for whom cancer is the leading cause of death, so we are highly motivated to increase their involvement,” said Professor Moon Chen, the cancer center’s associate director for cancer control.

UC Davis researchers have found that less than five percent of all clinical trials participants in the U.S. include minorities, less than two percent of clinical cancer research studies focus on non-white ethnic or racial groups, and biospecimen collection among diverse populations lags far behind that of non-Hispanic whites.

They found many causes of confusion, from pervasive cultural beliefs to language problems such as inaccurate translation of certain terms and phrases.

“There are a lot of myths within Asian communities,” said Angela Sun, who oversees education outreach activities for AANCART and developed the clinical trials materials. “It’s critical that we educate our community on the importance of participating in cancer research in a culturally appropriate way.”

Research revealed many Asian-American cancer patients hesitated to participate in clinical trials because they believed if they were placed into the control group, their regular treatment would end. To address this concern, AANCART tailored the materials by explaining how trials are conducted to assure patients that proper cancer treatment would continue.

To understand additional barriers, AANCART team members also interviewed physicians.“We learned that physicians want to approach patients, but language and culture barriers hindered effective patient/provider communication,” said Julie Dang, administrative core director at AANCART. “We would like to see health systems throughout the United States utilize our materials because these communities would want to participate in cancer research.”

The one-on-one educational sessions with patients provide detailed information about research opportunities. Patients eligible to participate in a trial after discussing it with their doctor are then assigned a bilingual “patient navigator” who helps them through every step of the clinical trial. “Asian-Americans’ participation in cancer research is important both for their benefit and to help scientists develop better cancer drugs and protocols for future generations,” said Chen. He added that biospecimen collection is critical because clinical research increasingly relies on the availability of appropriate genetic materials for the development of new, more targeted therapies. When underrepresented, minority patients cannot equally benefit from clinical research breakthroughs. Karen Kelly, associate director for clinical research at the cancer center said the value of minority participation in cancer clinical trials has been well documented. “Clinical trials in diverse populations can help us understand the biology of disease and why a drug may produce a higher response rate and higher toxicity in one group than in another,” she said.

UC Davis Comprehensive Cancer CenterUC Davis Comprehensive Cancer Center is the only National Cancer Institute-designated center serving the Central Valley and inland Northern California, a region of more than 6 million people. Its specialists provide compassionate, comprehensive care for more than 10,000 adults and children every year, and access to more than 150 clinical trials at any given time. Its innovative research program engages more than 280 scientists at UC Davis, Lawrence Livermore National Laboratory and Jackson Laboratory (JAX West), whose scientific partnerships advance discovery of new tools to diagnose and treat cancer. Through the Cancer Care Network, UC Davis collaborates with a number of hospitals and clinical centers throughout the Central Valley and Northern California regions to offer the latest cancer care. Its community-based outreach and education programs address disparities in cancer outcomes across diverse populations. For more information, visit cancer.ucdavis.edu.