This animation helps explain the dynamics of subglacial water exchange and how it is observed from space. It begins with a satellite image of the study area, followed by an artist’s concept of the Antarctic surface. The animation then moves down to a cross section of the ice sheet with lakes hidden deep beneath. As pressure is exerted on one lake, its water is forced to an adjacent lake, resulting in elevation changes at the surface over both lakes. 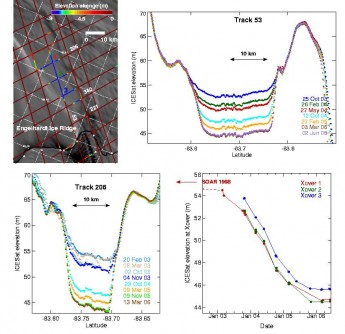 Newswise — The San Diego Supercomputer Center (SDSC) and Scripps Institution of Oceanography at the University of California San Diego have been awarded a NASA ACCESS grant to develop a cyberinfrastructure platform for discovery, access, and visualization of data from NASA’s ICESat and upcoming ICESat-2 laser altimeter missions.

ICESat and ICESat-2 (scheduled for launch in 2018) measure changes in the volume of Earth’s ice sheets, sea-ice thickness, sea-level height, the structure of forest and brushland canopies, and the distribution of clouds and aerosols.

The new project, dubbed “OpenAltimetry” (www.openaltimetry.org), will build upon technology that SDSC developed for its NSF-funded OpenTopography facility, which provides web-based access to high-resolution topographic data and processing tools for a broad spectrum of research communities.

OpenAltimetry will enable researchers unfamiliar with ICESat/ICESat-2 data to easily navigate the dataset and plot elevation changes over time in any area of interest. These capabilities will be heavily used for assessing the quality of data in regions of interest, and for exploratory analysis of areas of potential but unconfirmed surface change.

Possible use cases include the identification of subglacial lakes in the Antarctic, and the documentation of deforestation via observations of forest canopy height and density changes.

“The unique data generated by ICESat and the upcoming ICESat-2 mission require a new paradigm for data access, both to serve the needs of expert users as well as to increase the accessibility and utility of this data for new users,” said Adrian Borsa, an assistant professor at Scripps’ Institute of Geophysics and Planetary Physics and principal investigator for the OpenAltimetry project. “We envision a data access system that will broaden the use of the ICESat dataset well beyond its core cryosphere community, and will be ready to serve the upcoming ICESat-2 mission when it begins to return data in 2018,” added Borsa. “Ultimately, we hope that OpenAltimetry will be the platform of choice for hosting similar datasets from other altimetry missions.”

The OpenAltimetry cyberinfrastructure will include a web-based map interface for easy data discovery, with additional visualization and quality control tools that will make the interface a valuable resource for ICESat experts. Working behind the scenes will be a highly scalable data management platform with tiered storage, system-wide usage monitoring, application program interfaces (APIs) for programmatic access for expert users and interoperability with other systems.

“OpenTopography has demonstrated that enabling online access to data and processing tools via easy-to-use interfaces can significantly increase data use across a wide range of communities in academia and industry, and can facilitate new research breakthroughs,” said Viswanath Nandigam, associate director for SDSC’s Advanced Cyberinfrastructure Development Lab. Nandigam also is the principal investigator for the OpenTopography project and co-PI of OpenAltimetry.

On a broader scale, the OpenAltimetry project addresses the primary objective of NASA’s ACCESS (Advancing Collaborative Connections for Earth System Science) program, which is to improve data discovery, accessibility, and usability of NASA's earth science data using mature technologies and practices, with the goal of advancing Earth science research through increasing efficiencies for current users and enabling access for new users.

About SDSC As an Organized Research Unit of UC San Diego, SDSC is considered a leader in data-intensive computing and cyberinfrastructure, providing resources, services, and expertise to the national research community, including industry and academia. Cyberinfrastructure refers to an accessible, integrated network of computer-based resources and expertise, focused on accelerating scientific inquiry and discovery. SDSC supports hundreds of multidisciplinary programs spanning a wide variety of domains, from earth sciences and biology to astrophysics, bioinformatics, and health IT. SDSC’s Comet joins the Center’s data-intensive Gordon cluster, and are both part of the National Science Foundation’s XSEDE (Extreme Science and Engineering Discovery Environment) program. Learn more at http://www/sdsc.edu.

About Scripps Institution of OceanographyScripps Institution of Oceanography at the University of California San Diego, is one of the oldest, largest, and most important centers for global science research and education in the world. Now in its second century of discovery, the scientific scope of the institution has grown to include biological, physical, chemical, geological, geophysical, and atmospheric studies of the earth as a system. Hundreds of research programs covering a wide range of scientific areas are under way today on every continent and in every ocean. The institution has a staff of more than 1,400 and annual expenditures of approximately $195 million from federal, state, and private sources. Learn more at https://scripps.ucsd.edu.