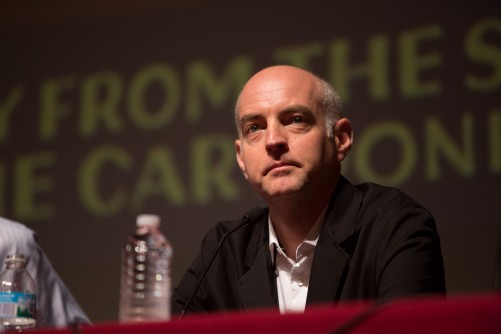 Daniel Clowes at the University of Chicago in 2012.

Newswise — The University of Chicago Library has acquired the papers of cartoonist Daniel Clowes, Lab’79, giving researchers access to never-before-seen notes and sketches from the acclaimed comic book author.

“Daniel Clowes’ work is renowned for its sharp satire and compelling characters. This collection offers rare insights into Clowes’ creative process and the challenges and complexities of his art. It will be an exciting resource for scholars at the University of Chicago and beyond,” said Daniel Meyer, director of the Special Collections Research Center, which will house the Daniel Clowes Archive.

Clowes’ first professional work appeared in Cracked magazine in 1985. In 1989, he created the seminal comic book series Eightball, which ran for 23 issues through 2004 and earned him a large following and multiple industry awards.

Eightball generated several graphic novels, including Like a Velvet Glove Cast in Iron, Pussey! and Ghost World, his breakthrough hit about the last summer of a teenage friendship. The 2001 film adaptation of Ghost World, based on a script by Clowes and director Terry Zwigoff, was nominated for an Academy Award for best adapted screenplay.

Ice Haven, an intricate tale of kidnapping and alienation in a small Midwestern town, and The Death-Ray, the unlikely story of a teenage superhero in the 1970s, both appeared in Eightball before their publication in book form. Clowes’ “middle-aged romance” Mister Wonderful began as a serialized comic for The New York Times Magazine was collected in an expanded hardcover edition in 2011. Materials related to Ice Haven, The Death-Ray and Mister Wonderful are featured in the Daniel Clowes Archive.

Clowes’ comics, graphic novels and anthologies have been translated into more than 20 languages, and his work has been the subject of numerous international exhibitions. A major retrospective of his work debuted at the Oakland Museum of California in 2012 and traveled to the Museum of Contemporary Art in Chicago in 2013.

“I couldn’t be more honored and pleased (and, frankly, astonished) to have my archival materials included in the University’s Special Collection,” Clowes said. “The University of Chicago, both the physical campus and the institution, was central, almost overwhelmingly so, to my formative life, the first 18 years of which were spent three blocks away from this very site, and there could no more appropriate place for these papers to find their home.”

In 2012, Clowes participated in the “Comics: Philosophy and Practice” conference sponsored by the Richard and Mary L. Gray Center for Arts and Inquiry at the University of Chicago. That event brought together 17 world-renowned cartoonists for three days of public conversation.

Prof. Hillary Chute, the conference organizer and expert on contemporary comics, has included Clowes’ work in her courses and interviewed him for her book Outside the Box.

“Dan Clowes is one of the most important cartoonists working today—and, crucially, he helped to invent the ‘graphic novel’ field as we know it today in his decades of groundbreaking work. His work has been a huge influence on many, many cartoonists—and on me, both as a person and a scholar of comics,” said Chute, associate professor in English and the College. “I could not be more honored and thrilled that the University has acquired an archive by an artist of this caliber.”

The Daniel Clowes Archive adds to the University of Chicago Library’s growing collection of materials related to word and image studies. The Library holds an extensive collection of contemporary comics, including many comics and zines published in Chicago, as well as the Walter C. Dopierala Comic Book Collection, which contains more than 2,000 popular mid-century comic books. The Library plans to add to its comics archive in the years to come.

The Daniel Clowes Archive is open to researchers.