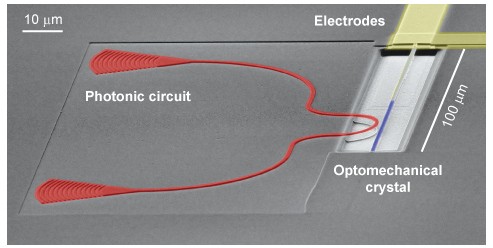 This scanning electron microscope image of an integrated quantum device shows a mechanically suspended crystal (blue) with metal electrodes (yellow) and a semiconductor photonic circuit (red). The scale bar at upper left measures 10 microns, much less than the diameter of a human hair. The device seamlessly transfers signals between optical and electrical quantum states, which have significantly different characteristics.

Newswise — The University of Chicago’s Institute for Molecular Engineering will lead a team of researchers from five universities in an ambitious five-year, $6.75 million project to create a new class of quantum devices that will allow communication among quantum computers.

Compared to binary computing, the use of quantum states of matter to communicate and store information could radically increase computing memory and speed and completely change how society thinks about information. Recent dramatic advances in this field have prompted researchers to begin considering quantum computing as a realistic possibility.

“It’s turning out to be less complicated to manipulate quantum states in semiconductors and superconductors than previously imagined,” said the project’s lead scientist David Awschalom, a physicist and the institute’s Liew Family Professor in Spintronics and Quantum Information.

This team has an ambitious plan to engineer these capabilities toward the establishment of quantum networks. “In order to combine these states into something more complex, we need a technology that connects individual quantum states together, using ‘quantum wiring’ that transfers information from one quantum device to another,” Awschalom said.

One goal of the new project is to communicate information between electrical quantum states and light using high-frequency mechanical motion as the intermediary. Specifically, the team will exploit the piezoelectric effect in optomechanical devices so as to transfer information between optical, vibrational and electrical quantum states. Piezoelectric materials develop an electric charge in response to a stress, and thus provide a means to mechanically control information transfer between electrons and photons. Such devices would be a first step in connecting local quantum states to an optical transmission network.

In addition to Awschalom and Andrew Cleland, UChicago professor in molecular engineering, the team includes Sunil Bhave of Cornell University, Michel Devoret and Hong Tang of Yale University, Andrei Faraon of the California Institute of Technology and Aashish Clerk of McGill University.

The team will develop piezoelectric materials similar to those used in smartphones, integrated as tiny electromechanical devices, with sizes down to the nanometer scale (a virus measures 50 to 100 nanometers in diameter, a thousand times smaller than a human hair). These devices will be designed to vibrate mechanically at frequencies above a billion times a second, as well as trap light in their interior.

“The idea is that in these devices, you can make light and mechanics lose their separate identities, so that quantum information can transfer seamlessly from one to the other,” Cleland said. “The use of piezoelectricity then gives you a direct line into an electrical quantum system, such as a superconducting quantum bit.”

“We want to show that in principle this is possible, and to build functional devices in just a few years. It’s very ambitious,” Awschalom said. “We have assembled a team to synthesize novel materials, manipulate quantum states with photonics and electronics, fabricate robust devices at the nanometer scale, develop communication links between these devices and model these functions with realistic theoretical models,” he continued. “This is the type of research that no individual person on this team could do themselves. You need a collaborative group of talented scientists and engineers,” Awschalom said.

“If Prof. Awschalom’s team is successful in solving this hard problem, their work will enable new types of computers that operate exponentially faster than today’s computers to solve certain problems that realistically cannot be solved with any modern computer,” said Henry Everitt, a senior research scientist for the U.S. Army at Redstone Arsenal and adjunct professor of physics at Duke University, who is unconnected with the project. “Their work will also enable new forms of secure communication and new types of sensors for some of the most delicate interactions in nature,” Everitt explained.

The research is funded by the Air Force Office of Scientific Research through the Department of Defense Multidisciplinary University Research Initiative program, which supports basic research conducted by teams of investigators that intersect more than one traditional science and engineering discipline. The UChicago-led project is one of only 24 MURI projects funded in 2014. — Jane Marie Andrew