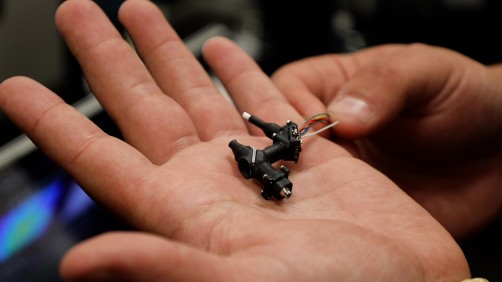 A current version of the “miniscope” developed by UCLA researchers.

Newswise — The UCLA creators of a miniature microscope that can be mounted on the heads of lab animals to provide an invaluable view into the brain’s inner workings have received a $4 million grant from the National Institutes of Health to develop next-generation versions of their “miniscope.”

The four-year award, part of the NIH’s BRAIN Initiative, will support the design, manufacturing and distribution of two types of new two-photon miniscopes that will allow scientists to peer much deeper into the brain than before. As they did with previous versions, the UCLA researchers will share detailed instructions on how others can build and operate their own devices.

“These are very important tools that can be transformative for any neuroscience question that requires looking at the activity of large populations of brain cells in freely behaving animals,” said Dr. Peyman Golshani, a professor of neurology at UCLA and the grant’s principal investigator.

The UCLA researchers’ miniscope has been used in over 500 labs worldwide since the device was created and shared with other researchers about a decade ago. The open-source nature of their miniscope “basically democratized” access to miniature microscopes, Golshani said, noting that similar devices were once sold by private companies for about a hundred times more than the cost of their model, whose mostly off-the-shelf materials total about $1,000 to $2,000.

The miniscope, which is about an inch tall and weighs less than 4 grams, snaps into a baseplate implanted on top of an animal’s head, capturing neuronal activity. The data is then sent by a thin wire to a computer for analysis.

While neuronal activity previously could only be observed through much larger, heavier microscopes that had to be fixed in place, the miniscope enables researchers to study brain function in animals free to explore their environment and is helping to unlock new insights into social behavior, memory and neurological conditions.

Researchers can use the miniscope to study neuronal activity in healthy animals, as they learn something new or engage in behaviors whose associated brain function remains a mystery. They can also study mouse models of neurological disorders — such as Alzheimer’s disease, epilepsy or autism — to potentially understand which cell types are malfunctioning and how they may be repaired.

The two new miniscopes funded by the NIH grant will produce much higher-resolution images than previous versions and allow researchers to see the fine structure of connections in the brain, rather than just the cell bodies. One miniscope will be light enough to be worn by a mouse and have a larger field of view than any similar microscope, and the other can be worn by a rat and image thousands of brain cells simultaneously.

The BRAIN Initiative, the NIH’s effort to support study of the human brain and potentially spur development of better methods for diagnosing and treating neurological diseases, previously awarded UCLA researchers $3.7 million to design earlier versions of the miniscope.

Other UCLA professors working on the miniscopes include Daniel Aharoni, Tad Blair, Anne Churchland and Alcino Silva. Collaborators include Julie Bentley of the University of Rochester, Matthew Shtrahman of UC San Diego and Alipasha Vaziri of Rockefeller University. Blake Madruga, a UCLA graduate student in neuroscience, played a key role in designing, building and testing the new miniaturized microscopes.