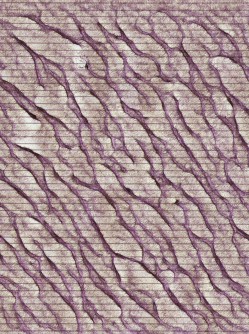 When crossing over alternating horizontal strips of substrates produced by researchers, cells (in purple) line up in uniform, diagonal structures, creating an architectural pattern similar to those found in living tissue.

Newswise — What if we could engineer a liver or kidney from a patient's own stem cells? How about helping regenerate tissue damaged by diseases such as osteoporosis and arthritis? A new UCLA study bring scientists a little closer to these possibilities by providing a better understanding how tissue is formed and organized in the body.

A UCLA research team discovered that migrating cells prefer to turn right when encountering changes in their environment. The researchers were then able to translate what was happening in the cells to recreate this left–right asymmetry on a tissue level. Such asymmetry is important in creating differences between the right and left sides of structures like the brain and the hand.

The research, a collaboration between the David Geffen School of Medicine at UCLA and the Center for Cell Control at UCLA's Henry Samueli School of Engineering and Applied Science, appears in the Feb. 17 issue of the journal Circulation Research.

"Our findings suggest a mechanism and design principle for the engineering of tissue," said senior author Dr. Linda L. Demer, a professor of medicine, physiology and bioengineering and executive vice chair of the department of medicine at the Geffen School of Medicine. "Tissue and organs are not simply collections of cells but require careful architecture and design to function normally. Our findings help explain how cells can distinguish and develop highly specific left–right asymmetry, which is an important foundation in tissue and organ creation."

Using microtechnology, the team engineered a culture surface in the lab with alternating strips of protein substrates that were cell-adhesive or cell-repellent, analogous to a floor with narrow horizontal stripes of alternating carpet and tile. Cells may encounter such surface changes when they travel through the body. The researchers observed that as the migrating cells crossed the interface between "carpet" and "tile" sections, they exhibited a significant tendency to turn right by 20 degrees, and, like a marching band, lined up in long, parallel rows, producing diagonal stripes over the entire surface.

"We had been noticing how these vascular cells would spontaneously form structures in cultures and wanted to study the process," said first author Ting-Hsuan Chen, a graduate student researcher in the department of mechanical and aerospace engineering at UCLA Engineering. "We had no idea our substrates would trigger the left–right asymmetry that we observed in the cells. It was completely unexpected.

"We found that cells demonstrated the ability to distinguish right from left and to self-organize in response to mechanical changes in the surfaces that they encounter. This provides insight into how to communicate with cells in their language and how to begin to instruct them to produce tissue-like architecture."

According to the researchers, the cells can sense the substrates beneath them, and this influences the direction of their migration and what shapes they form in the body. Of most interest, the researchers said, was the fact that the cells responded to the horizontal stripes by reorganizing themselves into diagonal stripes.

The team hopes to harness this phenomenon to use substrate interfaces to communicate with cells and instruct them to produce desired tissue structures for replacement. By adjusting the substrates, the researchers say, they have the potential to guide what structures the cells and tissue form.

The next stage of the research will be to control and guide cells to self-organize into two-dimensional and, eventually, three-dimensional patterns chosen by the researchers.

According to the research team, this is one of the first studies to demonstrate that encountering a change in substrate can trigger a cell's preference for turning left or right. It is also one of the first studies showing that cells can integrate left–right asymmetry into a patterned structure of parallel diagonal stripes resembling tissue architecture.

"Applications for this research may help in future engineering of organs from a patient's own stem cells," Demer said. "This would be especially important given the limited supply of donor organs for transplant and problems with immune rejection."

The study was funded by the National Science Foundation and National Institutes of Health.