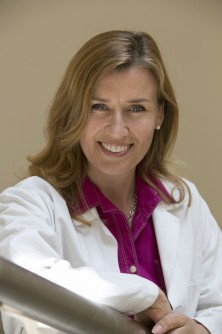 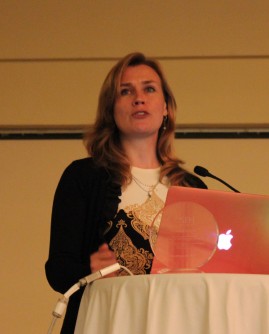 Dr. Hanna Mikkola makes her acceptance speech for the 2013 McCulloch and Tillman Award at the ISEH meeting in Vienna, Austria on August 25. 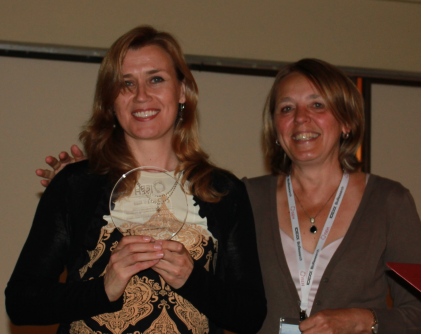 Dr. Hanna Mikkola, member of the UCLA Eli & Edythe Broad Center for Regenerative Medicine & Stem Cell Research and the Jonsson Comprehensive Center and an associate professor of molecular, cell, and developmental biology in the life sciences has been named the 2013 recipient of the McCulloch and Till Award by the Society for Hematology and Stem Cells, also known as the ISEH.

Established in 2004 in honor of Ernest McCulloch and James Till, who are known as the “fathers” of stem cell science, this award recognizes junior scientists in the field of experimental hematology and stem cells. The award is given annually to one scientist who is nominated and selected as an outstanding early career investigator in the field. Professors McCulloch and Till are widely considered to be the first scientists to show that the bone marrow contains stem cells, a finding that gave rise to the field of bone marrow transplantation.

The driving force and long-standing desire behind Mikkola’s research is to improve leukemia treatment by understanding the origin of hematopoietic or blood-producing stem cells (HSCs). Mikkola feels she can best contribute to that mission by uncovering the biological mechanisms that control the development of HSCs with the ultimate goal of establishing new sources of the cells for bone-marrow transplantation to treat leukemia. Because many of those mechanisms are also involved in the disease-development path of leukemia, knowing how those regulators act will reveal a greater understanding of leukemia’s origins, leading to innovative and effective treatments for the disease.

Toward that goal, several important discoveries related to blood-forming cells have been made in her laboratory in the past eight years, including: her team solving a long-standing mystery of the origin of blood stem cells with the discovery that these cells are generated and nurtured in the placenta; identifying critical cues in the placental hematopoietic niche that ensure that blood stem and progenitor cells do no differentiate prematurely; and discovering that loss of one transcription factor that drives blood stem and progenitor cell development in embryonic tissues converts the blood-forming precursor cells to beating cardiomyocytes, or heart muscle cells. These discoveries may prove critical to developing a new generation of stem-cell—based therapies to treat blood and heart diseases.

Mikkola received the McCulloch and Till award at the ISEH annual meeting in Vienna Austria on August 25, 2013. “I am extremely honored and humbled to receive this award,” Mikkola said, “it is very gratifying to receive recognition from my fellow scientists that we have advanced stem cell science in the field of experimental hematology. This has been made possible through teamwork of many enthusiastic and dedicated lab members and collaborators that I have had the pleasure to work with. I thank the ISEH membership and will use this recognition as incentive to continue our research with the passion, rigor and focus that has brought us this far.”

Dr. Mikkola has also received awards acknowledging her cutting-edge scientific research from the Leukemia & Lymphoma Society, American Society of Hematology and V-Foundation for Cancer Research. Her work is funded currently by the California Institute for Regenerative Medicine and the National Institutes of Health.

The stem cell center was launched in 2005 with a UCLA commitment of $20 million over five years. A $20 million gift from the Eli and Edythe Broad Foundation in 2007 resulted in the renaming of the center. With more than 200 members, the Eli and Edythe Broad Center of Regenerative Medicine and Stem Cell Research is committed to a multi-disciplinary, integrated collaboration of scientific, academic and medical disciplines for the purpose of understanding adult and human embryonic stem cells. The center supports innovation, excellence and the highest ethical standards focused on stem cell research with the intent of facilitating basic scientific inquiry directed towards future clinical applications to treat disease. The center is a collaboration of the David Geffen School of Medicine, UCLA’s Jonsson Cancer Center, the Henry Samueli School of Engineering and Applied Science and the UCLA College of Letters and Science. To learn more about the center, visit our web site at http://www.stemcell.ucla.edu. 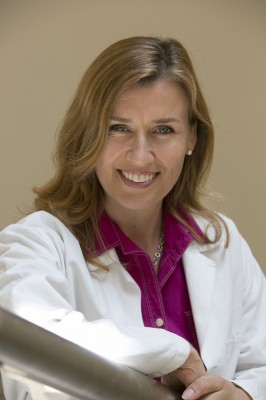 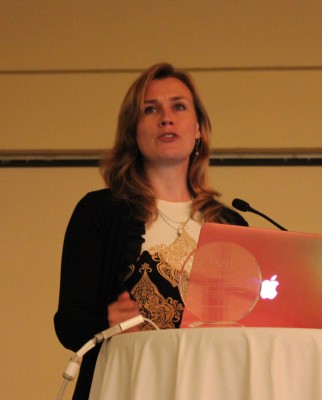 Caption: Dr. Hanna Mikkola makes her acceptance speech for the 2013 McCulloch and Tillman Award at the ISEH meeting in Vienna, Austria on August 25. 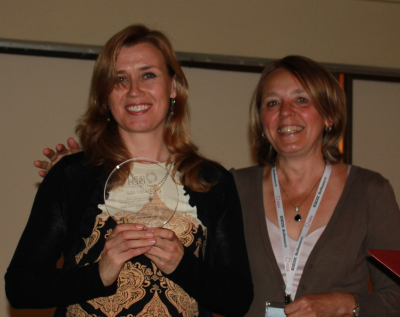