10-Oct-2016 3:05 PM EDT, by University of Florida Institute of Food and Agricultural Sciences 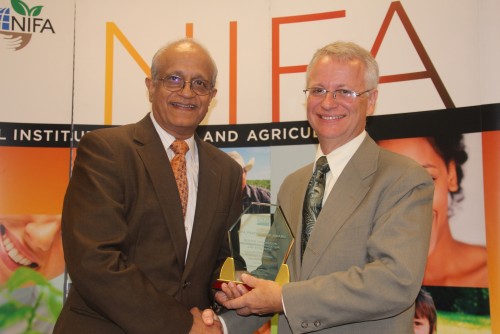 Newswise — GAINESVILLE, Fla. — The PINEMAP project, based within the University of Florida Institute of Food and Agricultural Sciences, devoted five years to helping the Southeastern planted-pine industry prepare for future production challenges. Now, PINEMAP is being honored with a prestigious national award from the United States Department of Agriculture.

On Thursday, Oct. 6, the USDA National Institute of Food and Agriculture, or NIFA, announced that PINEMAP would receive one of three 2016 NIFA Partnership Awards presented nationwide. The award recognizes PINEMAP for its outstanding performance integrating and fulfilling the education, Extension and research missions common to all land-grant universities.

The award confirms yet again the impact of UF/IFAS programs for one of the state’s most important industries, said Jack Payne, UF senior vice president for agriculture and natural resources.

“Planted pine is cultivated on about 20 million acres throughout the Southeast. This industry is enormously important both economically and environmentally, and the work of PINEMAP was crucial to help secure the industry’s future,” Payne said. “Our UF/IFAS faculty members have shown exemplary leadership and scholarship; this honor is richly deserved.”

PINEMAP involved UF and 10 other southeastern U.S. land-grant institutions, as well as numerous collaborators from government agencies and private industry. The project was launched in February 2011 after leaders obtained one of three $20 million grants awarded concurrently by USDA as part of its Coordinated Agriculture Projects program, meant to strengthen vital domestic crop-production industries.

For the project, leaders developed numerous forward-thinking assessments and studies aimed at helping the Southeastern planted-pine industry adapt to the projected effects of climate variability and climate change, such as reduced summer rainfall and increased mean temperatures, said Jackie Burns, UF/IFAS dean for research and director of the Florida Agricultural Experiment Station.

“The PINEMAP project team conducted many new and needed experiments, because the team leaders had taken the time to determine what data existed, what data were needed and how they could fill the gaps,” Burns said. “This initiative succeeded because the team members were so well-positioned, and so determined, to help usher the industry into the future with a clear vision and practical planning.”

One aspect of the PINEMAP project that greatly contributed to its effectiveness was the availability of data from field studies conducted by research cooperatives or “co-ops” formed by academic researchers and forest-products producers. The co-ops, some of them dating back to the 1950s, offered a treasure trove of data stemming from past studies, as well as suitable locations for new studies initiated by PINEMAP. The project also created innovative education and outreach programs designed to enable non-industrial private forest landowners as well as secondary-school students and teachers to better understand forests and climate.

Tim Martin, head of the PINEMAP leadership team, agreed that the co-op data provided exactly the sort of long-term, retrospective view that the project required, and asserted that team members’ enthusiasm completed the picture.

“I’m confident that every one of the 50 co-investigators and 60 graduate students and staff members on our team feels as proud as I do that we were able to help secure the future of the Southern planted-pine industry,” said Martin, a professor with the UF/IFAS School of Forest Resources and Conservation. “I look forward to future collaborations with PINEMAP team members as we build on our findings and help inform the industry and others about the important role that forest management should play in a changing world.”