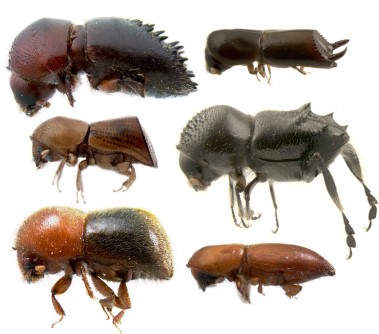 Beetles such as these from Papua New Guinea are accidentally exported worldwide and eat trees wherever they go, according to a new book co-written by a University of Florida scientist.

Newswise — GAINESVILLE, Fla. – Pesky beetles sit, ready to pounce on their unwitting prey: trees around the world, which sustain billions of dollars in damage because of the armored insects, says a University of Florida scientist, who has co-written a book about beetles native to Papua New Guinea.

Thousands of beetle species make their home in Papua New Guinea, a small island off the northern coast of Australia, but only two or three travel to other parts of the globe, said Jiri Hulcr, a UF assistant professor of forest entomology. First, they have to be exported, something humans do by accident, said Hulcr, a member of the Institute of Food and Agricultural Sciences’ faculty.

“We put them in habitats where they shouldn’t be,” he said, by exporting wood or using it to send ship cargo. “It’s not as though these beetles have evolved as killing species. They have evolved in their native habitat.”

Once they reach their destination, the beetles look for something to eat, he said. Slowly but surely, they discover and eat trees.

“These are disasters in kind of slow motion,” Hulcr said.

“They’ve been with me ever since I can remember,” Hulcr said. “When I was 4 years old, I was picking up beetles and showing them to people, and it was exciting. I had a series of small jars with live beetles in them.”

He spent about a year and half as a research station manager in Papua New Guinea. He also did his doctoral dissertation on this group of beetles. The monograph is an extension of that research, Hulcr said.

The book, “Xyleborini of New Guinea, a Taxonomic Monograph,” co-written by Anthony Cognato, a Michigan State University associate entomology professor, is the first step, Hulcr said. Next, he and his UF research team will isolate fungi carried by these insects to see if they are deadly pathogens.

“We should do something about it before anything bad happens,” he said.

In the book, Hulcr addresses beetles’ potential to damage trees.

Of the 600,000 beetle species globally, very few kill trees, but those that do cause enormous economic damage, Hulcr said. For example, the Redbay Ambrosia beetle and its associated fungus cause a disease called the laurel wilt that kills many trees, including avocados, he said. The Redbay beetle threatens Florida’s avocado industry, which UF researchers estimate has a $27 million impact on the state’s economy. Overall, wood-boring beetles cause $2.5 billion annually in damage to U.S. trees, Hulcr said.