26-Jan-2016 8:05 AM EST, by University of Florida Institute of Food and Agricultural Sciences
favorite_border 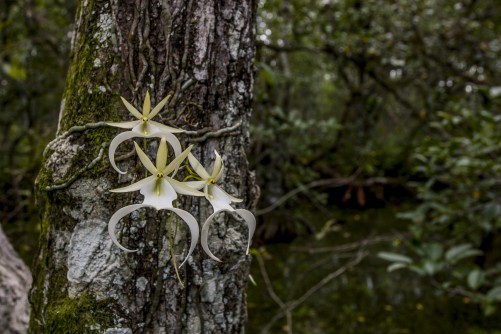 The rare and often-poached Ghost Orchid is seen on a tree in Southwest Florida. UF/IFAS scientists are preserving this endangered consumer favorite.

“We’ve successfully developed procedures to culture plants from seeds in the lab and then successfully acclimatize them into our greenhouse,” said Michael Kane, professor of environmental horticulture at UF/IFAS. “We’ve also obtained a high survival and vigorous re-growth rate when they’re planted back into the wild.”

This rare orchid is unique for several reasons. First, it resembles a ghost when its white flower moves at night; hence, it is known as the Ghost Orchid. It is also leafless, and its roots attach to the bark of the host tree.

About 2,000 ghost orchids remain in Florida, all the more reason to step up efforts to stabilize the current populations, Kane said. The Ghost Orchid also grows in the Bahamas and Cuba. However, researchers are learning that these populations are thriving in very different environmental conditions than those in South Florida.

UF/IFAS scientists are trying to give ghost orchids the best chance to survive after they’re planted back in the native environment. Until now, there’s only been non-scientific information on ways to grow the Ghost Orchid, Kane said. There’s no information on how to reliably produce them in a lab or reintroduce them into nature.

Kane and doctoral student Hoang Nguyen are trying to change that trend. For three years, Kane and Nguyen, with funding from the U.S. Fish and Wildlife Service, have worked to bring Ghost Orchid seeds back from Southwest Florida to a propagation lab at the UF campus in Gainesville to see if they can germinate the seed under sterile conditions on a gelled medium and then transfer the plants into a greenhouse.

Their latest results showed they could develop a successful seed culture technique for the Ghost Orchid so they can replant it in the wild. Orchid seeds in the wild won’t germinate unless they are infected with a mycorrhizal fungus, Kane said. The UF/IFAS researchers worked with Larry Zettler, biology professor and director of the Orchid Recovery Program at Illinois College, to stimulate seed germination in the lab.

The scientists’ work has been so successful that Nguyen won the outstanding research poster contest at last June’s meeting of the Society for In Vitro Biology. Their study is currently being considered for publication.

Recently, they brought some of the plants back to their native habitat in the Florida Panther National Wildlife Refuge in eastern Collier County, Florida, and about 70 out of 80 of these Ghost Orchids have survived and are vigorously growing, Nguyen said. They are seeing similar results with Ghost Orchids planted later at the Naples Botanical Garden.

“For orchid conservation, this is big,” Kane said. “We are very excited.”

Ghost orchids became more famous through a popular book, “Orchid Thief,” about a man arrested for stealing them from trees in a forest in Collier County, near the Everglades. The book was made into a 2002 movie, titled “Adaptation,” with Meryl Streep.