31-Jul-2014 9:10 AM EDT, by University of Florida Institute of Food and Agricultural Sciences
favorite_border 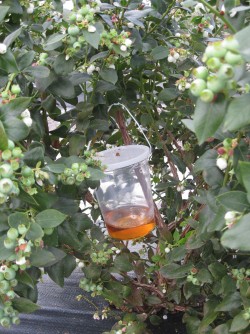 This cup with a yeast-sugar-water mixture lures and traps the most dangerous pest to berries. Add a drop of dish soap, and the bugs drown in the liquid. Knowing whether, and how many, of the pests a grower has is the first step to controlling them, said Oscar Liburd, UF/IFAS entomology professor. Credit: Photo courtesy of Oscar Liburd, UF/IFAS.

Newswise — GAINESVILLE, Fla. – Using a yeast-sugar-water mixture, berry growers can easily keep tabs on a pest that causes millions in damage each year in the U.S., a new University of Florida study shows.

Farmers can conduct a test to determine if the spotted wing drosophila is in their field – and if so, how prevalent. They punch holes near the upper rim of a covered plastic cup and pour in a yeast-sugar-water mix to about 1 inch high in the cup. The liquid mixture lures the pest, and growers add a drop of dishwashing liquid to thicken the bait and keep the bugs from escaping. Growers check the traps once a week to see how many bugs are in them. Knowing the pest population is the first step to controlling the bug, also known as the drosophila suzukii. The female insect cuts a slit in the fruit’s skin and lays eggs there. The larvae consume strawberries, blueberries, blackberries, raspberries and other thin-skinned fruit, said Oscar Liburd, a UF entomology and nematology professor. “The drosophila suzukii is the biggest threat to berry production in the United States,” said Liburd, a faculty member at UF’s Institute of Food and Agricultural Sciences. Scientists first saw the pest in the U.S. in California in 2008, and damage was estimated at $500 million that year. The pest caused an estimated $10 million to $12 million to Florida blueberries in 2012, Liburd said. Monitoring leads to a more profitable yield, he said.

“If you know the bugs are in your field, you can control them better with reduced-risk pest controls, which leads to more berries,” Liburd said.

Lindsy Iglesias, an entomology doctoral student, led the study as part of her master’s thesis. She worked with Liburd and postdoctoral fellow Teresia Nyoike to determine if adding a yellow visual stimulus to the plastic cups would lure and trap more bugs. Yellow attracts many insects because it resembles foliage, Liburd said.

In one experiment during 2012 and 2013, researchers compared plastic cups with and without a yellow visual stimulus and found that its absence had no effect on the number of spotted wing drosophila caught in the cups. While doing the research, they also found that cups with yeast sugar water caught more spotted wing drosophila than those with apple cider vinegar, Liburd said. On the other hand, the yeast-sugar-water lure stinks, and is cloudy, making it tougher to see the bugs, especially after one week, he said. Still, UF/IFAS experts encourage growers to use the yeast-sugar-water mix because it catches the bugs quickly, giving growers pest information faster, he said. UF/IFAS scientists recommend two traps per acre. Most Florida blueberry farms are 5 to 10 acres, although some consist of 500 or more. The spotted wing drosophila comes from southeastern Asia and is found in China, Japan, India, Korea, Myanmar, Russia, Thailand, France, Italy and Spain.

In August 2009, spotted wing drosophila was discovered in the northeast corner of Hillsborough County. As of June 2012 it had spread to several other states and 28 Florida counties. The highest numbers in Florida were recorded in Hillsborough, Citrus, Alachua and Marion counties. Florida experienced its worst infestation in 2012 and 2013 when the bug invaded every blueberry-producing county except one, Liburd said. Currently, growers are controlling the pest with chemical sprays.

The UF/IFAS study is published online by the Journal of Economic Entomology and will be in the August print edition.