UF Study Shows “Pretty” Termites Do the Most Damage

15-May-2017 8:05 AM EDT, by University of Florida Institute of Food and Agricultural Sciences
favorite_border 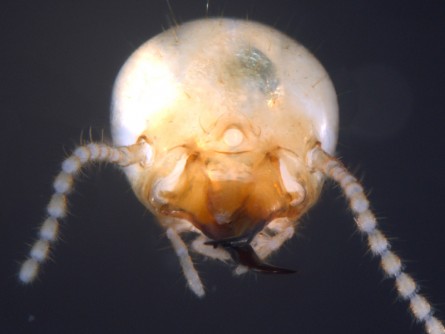 This photo shows what UF/IFAS scientists call an "ugly" termite because it's traits are asymmetrical. They generally come from young colonies. Such “ugly” termites developed under stressful conditions, are short-lived and not very efficient at maintaining the colony.

Newswise — GAINESVILLE, Fla. --- Termites may be “pretty” in the eyes of a scientist, but don’t let good looks fool you: The prettier termites are more destructive than their uglier counterparts, a University of Florida researcher says.

Scientists who deem subterranean termites as “pretty” say they sport symmetrical traits and are more likely to come from mature colonies, said Thomas Chouvenc, a research assistant in entomology. So-called “ugly” termites have asymmetrical traits, he said. They generally come from young colonies. Such “ugly” termites developed under stressful conditions, are short-lived and not very efficient at maintaining the colony.

Thus, the older and larger the colony is, the prettier the termites are. And mature colonies can cause a lot more damage, said Chouvenc, a researcher with the UF Institute of Food and Agricultural Sciences.

“If you have a mature colony with a million termites at 100 percent of their capacity, your house may be in trouble,” Chouvenc said. “If the colony is very young, with just a few hundred termites in poor shape, then it would take more time for them to damage a structure. In the end, mature termite colonies are the ones doing the most economic damage.”

Plenty of economic damage, in fact. Asian subterranean termites are among the most damaging termites in the world, especially in the tropics, and represent a significant part of the $40 billion annual cost worldwide, Chouvenc said. This species was recently introduced in Florida and is spreading fast.

In their quest to discover more about how the Asian subterranean termite brings up its young and how that impacts larval development, Chouvenc and UF/IFAS entomology professor Nan-Yao Su conducted a study in which they examined the symmetry of the soldier caste of the Asian subterranean termite. They studied 459 soldiers from 73 six-month-old colonies to see how well they nurtured the young termites.

Younger colonies produced less-symmetrical termites, while more mature ones produced more symmetrical ones, the study showed. That’s because younger colonies are under more stress. They only have a king and queen to find food and groom the larvae, said Chouvenc, an entomologist at the Fort Lauderdale Research and Education Center. Once the larvae grow into workers, they can provide brood care to the newly laid eggs, so as the colony grows, the investment in caring for “baby” termites improves over time.

“A termite with poor symmetrical traits looks all messed up, like it was hit by a car,” said Chouvenc. “On the opposite end, termites raised in a mature colony in great conditions develop smoothly and are good-looking specimens.”

Here’s how baby termites can grow into “good looking” or “ugly” adults: The more worker termites in a colony, the better off the larvae – or “babies” – will be. Chouvenc compared the situation to nursing care in most animal societies, including humans.

If you have only two nurses for 10 baby termites, they don’t receive much attention, food and bath time, and the babies will develop in stressful conditions, resulting in asymmetrical babies, Chouvenc said. As the colony grows, you have 10 nurses for 10 babies, making better conditions to grow.

Because young colonies have small numbers of poorly efficient termites, compared to mature colonies, there is an incentive to eliminate such young colonies before they grow too big, to prevent the damage from occurring in the first place.

The latest UF/IFAS study is published in the journal Insectes Sociaux.