6-Sep-2018 10:05 AM EDT, by University of Florida Institute of Food and Agricultural Sciences 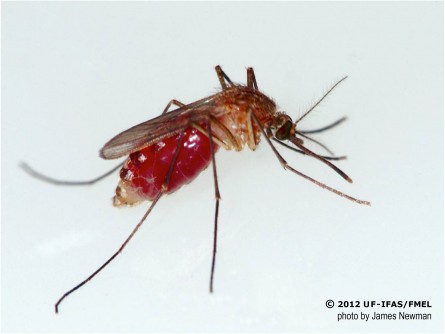 Infected mosquitoes are transmitting eastern equine encephalitis virus (EEEV) and West Nile virus (WNV) throughout Florida. Both of these viruses can cause severe disease in humans and horses, said Jonathan Day, a faculty member at the Florida Medical Entomology Laboratory in Vero Beach, Florida.

Newswise — GAINESVILLE, Fla. --- A University of Florida entomologist urges Floridians to protect themselves against biting mosquitoes because of unusually high levels of mosquito-borne virus transmission to sentinel chickens, horses and humans so far this summer.

“Floridians need to be aware of mosquito-borne disease risk and protect themselves from mosquito bites, especially from dusk to dawn,” said Jonathan Day, an entomology professor with the UF Institute of Food and Agricultural Sciences. “People with outdoor evening activities should take precautions to avoid mosquito bites, including wear protective clothing and use insect repellents, preferably those that contain 5 percent to 20 percent DEET as the active ingredient from now through early December.”

Infected mosquitoes are transmitting eastern equine encephalitis virus (EEEV) and West Nile virus (WNV) throughout Florida. Both of these viruses can cause severe disease in humans and horses, said Day, a faculty member at the UF/IFAS Florida Medical Entomology Laboratory in Vero Beach, Florida.

According to the Centers for Disease Control and Prevention, eastern equine encephalitis virus is rare in humans, and only a few cases are reported in the U.S. each year. Most people infected with EEEV have no apparent illness. Severe cases of EEEV begin with the sudden onset of headache, high fever, chills and vomiting. The illness may then progress into disorientation, seizures or coma.

EEE is one of the most severe mosquito-transmitted diseases in the United States with about 33 percent mortality, and significant brain damage in most survivors, the CDC says.

As for WNV, there is no vaccine available and treatment after infection is only supportive. Most people infected with WNV do not have symptoms, the CDC says. About one in five people who are infected develop a fever and other symptoms. About 1 out of 150 infected people develop a serious, sometimes fatal, illness.

Fifty-one horses, most in north Florida, have tested positive for eastern equine encephalitis, and most have died, Day said.