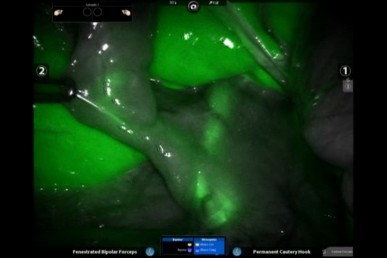 UI Health surgeons used near-infrared light to make the indocyanine green dye light up, allowing them to better see the biliary tract. Injury to the bile duct is rare – only 0.3 percent of the nearly 600,000 cholecystectomies performed in the U.S. annually – but it can cause severe complications to patients.

The retrospective study, published online in the journal Surgical Innovation, looked at 184 robotic cholecystectomies performed at UI Hospital between July 2011 and February 2013 that used the non-radioactive dye to image the bile duct.

Of the procedures performed, 112 were multiport and 72 were single-incision robotic cholecystectomies.

"We found that indocyanine fluorescence allowed us to visualize at least one biliary structure in 99 percent of cases," said Pier Cristoforo Giulianotti, chief of general, minimally invasive and robotic surgery and senior author of the study. These structures included the cystic duct (seen in 98 percent of cases), the common bile duct (96 percent) and the common hepatic duct (94 percent).

Visualization helped surgeons to identify variations in anatomy, and in four cases to detect the presence of gallstones impacted in the cystic duct, Giulianotti said.

No major complications, such as biliary injury or allergic reaction to the dye, were reported during the procedures.