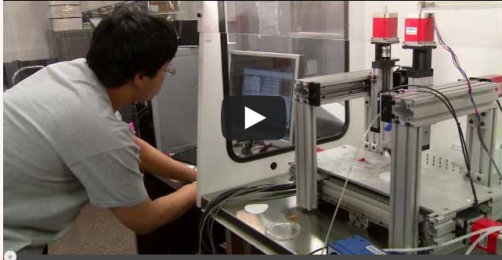 Researchers in the UI Center for Computer aided Design's Advanced Manufacturing Technology (AMTecH) group are refining equipment and techniques that may result in the 3D printing of human organs and tissue some five or 10 years from now. In this screen shot Howard Chen, doctoral student in the Department of Mechanical and Industrial Engineering and developer of the multi-arm bioprinter, builds multicellular structures using the device.

When it does, a new interdisciplinary manufacturing venture called the Advanced Manufacturing Technology (AMTecH) group at the University of Iowa College of Engineering’s Center for Computer Aided Design (CCAD) will likely help lead the charge.

AMTecH was formed to design, create, and test—both virtually and physically—a wide variety of electromechanical and biomedical components, systems and processes. Currently, the group is working on projects ranging from printed circuit boards for automobiles and aircraft to replacement parts for damaged and failing human organs and tissue, says Tim Marler, AMTecH co-director.

“Electromechanical systems are one of two current branches of the AMTecHgroup,” he says. “We want to simulate, analyze and test printed circuit boards and assemblies, because they are used in a wide range of products from missiles to power plants to cell phones.“The second branch of the group involves biomanufacturing and is led by my colleague and AMTecH co-director Ibrahim Ozbolat, assistant professor of mechanical and industrial engineering,” says Marler. “The long-term goal of this branch is to create functioning human organs some five or 10 years from now. This is not far-fetched.”

“One of the most promising research activities is bioprinting a glucose-sensitive pancreatic organ that can be grown in a lab and transplanted anywhere inside the body to regulate the glucose level of blood,” says Ozbolat. He adds that the 3D printing, as well as virtual electronic manufacturing, being conducted at AMTecH are done nowhere else in Iowa.

In fact, the multi-arm bio printer being used in the lab is unique. Ozbolat and Howard Chen, a UI doctoral student in industrial engineering, designed it and Chen built it. It turns out that managing multiple arms without having them collide with one another is difficult enough that other printers used in other parts of the world avoid the problem by using simpler designs calling for single-arm printing. As Chen continues to refine his and Ozbolat's design, the UI printer currently gives the UI researchers a distinct advantage.

While bioprinters at other institutions use one arm with multiple heads to print multiple materials one after the other, the UI device with multiple arms can print several materials concurrently. This capability offers a time-saving advantage when attempting to print a human organ because one arm can be used to create blood vessels while the other arm is creating tissue-specific cells in between the blood vessels.

The biomanufacturing group, which consists of researchers from various disciplines including industrial, mechanical, electrical, polymer and biomedical engineers as well as medical researchers, is working on this and other projects, and collaborates with Dr. Nicholas Zavazava, professor of internal medicine, in the UI Roy J. and Lucille A. Carver College of Medicine. The group also works with researchers from the college’s Ignacio V. Ponsetti Biochemistry and Cell Biology Laboratory.

In addition to receiving support from the National Institutes of Health for the artificial pancreas research, AMTecH is looking forward to continued support from the Electric Power Research Institute (EPRI) as well as seed funding from the UI for fostering commercialization of a new software product.