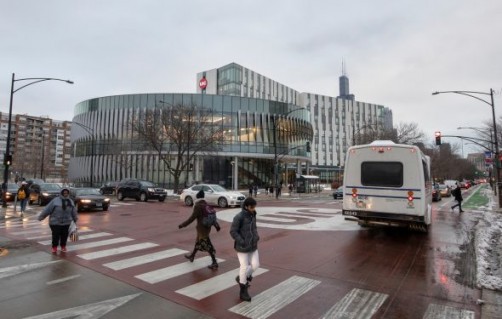 Students cross Harrison Street near the Academic and Residential Complex on the first day of spring semester. 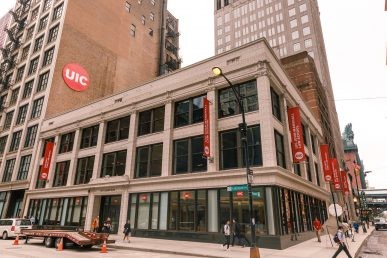 Newswise — The University of Illinois at Chicago has been recognized again for its academic strength in the U.S. News & World Report Best Graduate School rankings, bolstered this year by strong gains made by the recently acquired UIC John Marshall Law School.

The 2021 edition, released March 17, features information and rankings in law, engineering, business, medicine, public affairs, education and other graduate-level disciplines. This year’s rankings include data from the John Marshall Law School, which was acquired by UIC in 2019 and was made UIC’s 16th college.

The UIC John Marshall Law School moved from the 4th Tier to the 3rd Tier for the first time in four years and was ranked 140th out of 194 programs. The law school’s part-time J.D. program rose by 16 points from 45th to 29th. The International Law specialty jumped 41 points from 116th to 75th and the Intellectual property program rose by five points to 36th out of 188 ranked schools. The legal writing program jumped by one spot and is now ranked 7th among 179 schools.

The UIC College of Nursing Doctor of Nursing Practice program also continued its climb for the fourth year in a row, rising one spot to 6th place out of 171 ranked schools. The Nursing Administration specialty jumped five points to 11th, while the master’s program ranked 19th.

“It’s gratifying to see these rankings validate what we already know about our graduate programs: that we offer broad and deep clinical experiences, courses taught by top-notch faculty, access to world-class research and an environment that champions academic rigor,” said Terri Weaver, dean of the UIC College of Nursing.

The part-time MBA program in the College of Business Administration climbed four points, from 65th to 61st out of 272 institutions.

Not all programs are ranked every year, although the U.S. News Best Graduate Schools publication and the website content present the most recent rankings for every program, whether they were ranked in 2021 or not.