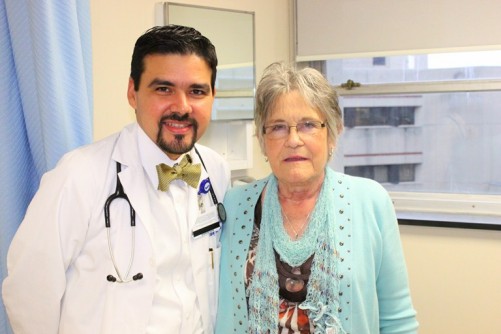 Wanda Craig poses for a photo with one of her surgeons, Dr. Diaz Guzman Zavala at a check-up appointment at the UK Transplant Center.

Newswise — LEXINGTON, Ky. (Oct. 31, 2011) — Surgeons at UK HealthCare recently became the first ever to perform two specific procedures together as a bridge to lung transplantation. Wanda Craig, of Lexington, Ky., is the first patient in history to receive these procedures, and at the age of 68, she is also the oldest living human to be bridged to transplant using an artificial lung device, also known as an extracorporeal membrane oxygenation (ECMO). For more than 10 years, Craig has been treated for chronic obstructive pulmonary disease (COPD) and emphysema, getting oxygen assistance on an almost continual basis. In November 2010, her condition worsened and she was unable to do the everyday activities she used to do. “I realized that things were really taking a turn for the worst when I was so out of breath from walking to the kitchen and I didn’t have enough energy to even scoop ice cream out of the carton,” said Craig. After being hospitalized and then transferred to the University of Kentucky Albert B. Chandler Hospital due to the severity of her case, Craig underwent the ECMO and heart procedures that saved her life. “I feel like a miracle,” Craig said. “I feel like I owe so much to UK and the medical staff here.”And a miracle she is – in more ways than one. “Mrs. Craig, although treated for COPD and emphysema, actually suffered from pulmonary hypertension and when her situation became more severe that caused the right half of her heart to fail as the heart tried to work harder to get the oxygen it needed,” said Dr. Charles Hoopes, UK HealthCare's new director of the UK Heart and Lung Transplant Program and the director of the Ventricular Assist Device (VAD) Program. "When the right side of the heart fails -- called right ventricular failure -- the blood cannot go through the lungs to fill the left side of the heart…with an empty left side of the heart there is less blood to pump to the body and the patient develops heart failure symptoms. This is not uncommon in end-stage lung disease." This is a major complication for many patients on the lung transplant waiting list. So, to circumvent this problem, Hoopes and Dr. Enrique Diaz, UK’s medical director of the lung transplant program, completed a procedure called an atrial septostomy, in which a small hole is created between the upper two chambers of the heart. This procedure, combined with the use of an ECMO, allowed the blood to receive oxygen from an artificial lung device. “These procedures are novel in terms of a bridge to transplantation, and the use of an artificial lung together with an atrial septostomy for cases of respiratory and right ventricular failure have not been performed together until now,” said Diaz. “I immediately felt better the morning after my surgery and was able to walk 75 feet after less than 24 hours,” said Craig. After only three days after the initial procedure, a new set of lungs became available for Craig and she underwent a double lung transplant. “Because of her age, we were apprehensive about the ECMO procedure and lung transplant, however she proved to us that she is not the typical 68-year-old woman,” Hoopes said.

Proudly boasting about her two children, 3 grandchildren, and two great-grandchildren, Craig said they were her motivation to keep going and try and get better as fast as possible. After being discharged from the hospital, Wanda and her husband celebrated their 50th wedding anniversary, and said that this experience has brought them closer together and helped their entire family appreciate the life and time they have together. After spending several holidays in the hospital over the past eight months, she is thankful she was able to be home for her milestone anniversary. “More than anything I am looking forward to doing those normal everyday things like going to the grocery store and watching my grandson’s T-ball games,” Craig said. “And scooping my own ice cream. I could not have made it through this without the support and prayers from my family and friends. "The care given to me while in the hospital was superb, and I'm thankful for my pulmonary physician that transferred me to UK HealthCare before it was too late for any lifesaving efforts. I'm also thankful for my donor family. I would not be here today without the knowledge of Dr. Hoopes and Dr. Diaz, and the entire transplant team. They took me under their wings in spite of all the risk involved - I will be in their debt the rest of my life."