Ultrafast Camera Captures Images at the Speed of Light

28-Apr-2015 9:00 AM EDT, by National Institute of Biomedical Imaging and Bioengineering
favorite_border 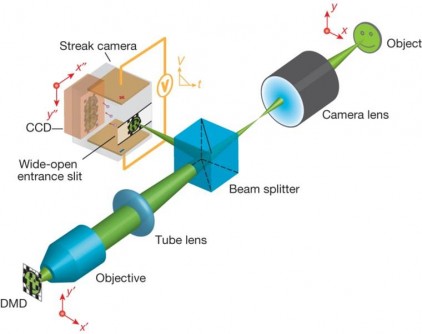 Newswise — An NIBIB grantee has developed an ultrafast camera that can acquire two-dimensional images at 100 billion frames per second, a speed capable of revealing light pulses and other phenomena previously too fast to be observed.

“When you turn on a laser pointer, you see an immediate beam of light. That’s because light moves so fast, you aren’t able to detect its movement with the naked eye. Using this camera, light is revealed as traveling through space from one point to another,” says the camera’s inventor, Lihong Wang, Ph.D., a professor of biomedical engineering at Washington University in St. Louis.

While other research groups have achieved higher frame rates (trillion f/s), Wang’s camera is the world’s fastest 2D camera that doesn’t require an external flash or multiple exposures. This distinction makes the camera particularly apt for imaging ultrafast, non-repetitive phenomena such as a single laser pulse or the short-lived, intermediate states of a biochemical reaction.

Wang is currently working to couple the camera to a microscope, which could help researchers gain valuable insights into previously unobservable biological phenomena.

For example, the camera could be used to visualize energy metabolism as it occurs within a cell’s mitochondria or the way light passes through tissue, an important consideration for therapies that use lasers to destroy diseased tissue with the goal of leaving healthy tissue unharmed. It could also help researchers determine how fluorescent signals decay over time. Such knowledge could be used to create fluorescent sensors that can detect diseases and cellular environmental conditions like pH or oxygen pressure.

“This camera has the potential to greatly enhance our understanding of very fast biological interactions and chemical processes that will allow us to build better models of complex, dynamical systems such as cellular respiration, or to help doctors better deliver and monitor light-based therapies,” says Richard Conroy, Ph.D., program director for Optical Imaging at NIBIB.

The novel camera is the fruit of an NIBIB grant supported via the NIH Director's Pioneer award, which Wang won in 2012. The award provides funding to exceptionally creative scientists who propose bold research approaches that are expected to have a transformative impact on biomedical research.

“Most of the time, we have to propose something that’s reasonably safe to get funded. With the Pioneer Award, we are emboldened to push in new directions. The unbridled funds have really allowed us to explore some high-risk, high-pay off ideas,” says Wang.

Wang and his colleagues recently created several movies of single laser shots racing through different media such as air or resin and being refracted or reflected off various surfaces. They were also able to capture the moment at which a fluorescent material began to fluoresce after being excited by an incoming laser shot. This latter capability is extremely valuable to biomedical research, which relies heavily on fluorescent probes to label and track proteins, nucleic acids, and other cellular components. Wang’s camera would enable researchers to visualize these fluorescently-labeled components at light speed.

Several years ago, Wang bought a streak camera, a device that measures variations in the intensity of a light pulse over time. Streak cameras are capable of capturing ultrafast events, but are limited to imaging in one dimension. Wang compares this to watching a horse race through a distant slit:

“It’s not very intuitive or informative. The camera on our phones can image in two dimensions even though the temporal resolution is poor. So that pushed us to add one more dimension somehow, and the only way to do that is to use the streak camera in an unconventional way.”

Wang knew that to capture a 2D event using a streak camera, he would have to widen the camera’s narrow slit. Yet doing so would be detrimental to the temporal resolution. To get around this, Wang developed a technique called compressed ultrafast photography (CUP).

The key to CUP is that prior to reaching the streak camera, the object is first encoded by a tiny apparatus called a digital micromirror device. The process is similar to taking a picture of an object through a piece of paper that has tiny, randomly distributed holes cut out of it. The full image of the object is later reconstructed from this encoded data using sophisticated algorithms based on a relatively new technique called compressed sensing.

Wang described his innovative CUP technique in the December 4, 2014 issue of Nature. Pushing the limit

Wang’s ultrafast 2D camera is one of several significant biomedical imaging advances that he has made over the past decade. With additional funding support from NIBIB, Wang recently overcame the optical diffusion limit, which is the depth at which light can be used to take images of tissues in the body by other existing high-resolution imaging technologies. Through the development of a technique called photoacoustic tomography, Wang was able to conquer this limit and advance the imaging depth by nearly two orders of magnitude, from one millimeter to several centimeters , an improvement that could enable doctors to acquire high-resolution images through a patient’s skin using light.

The technique is currently being tested in a number of clinical applications, including imaging breast tumors, detecting skin cancer, and tracking blood oxygenation in tissues.

For his extraordinary achievements in biophotonic technology, Wang was recently awarded the 2015 Britton Chance Biomedical Optics award from the International Society for Optics and Photonics.

This research was funded by the National Institutes of Health grants EB016986 and CA186567.