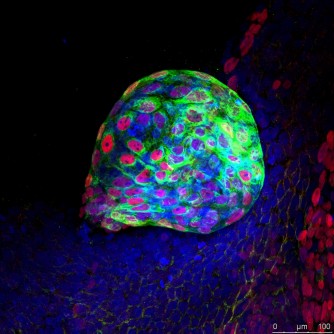 Cord blood-derived iPS cells can differentiate into the three embryonic tissue layers. TOP: The endodermal layer, identified by markers AFP and FoxA2, will give rise to the digestive tract, lungs and bladder. 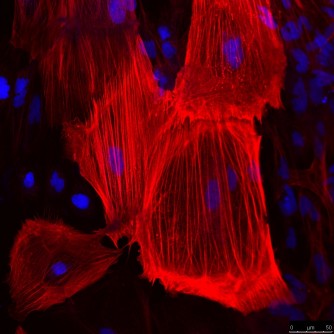 BOTTOM: The mesodermal layer, identified by ASM, will form bones, muscles, connective tissue and the middle layer of the skin.

Newswise — Umbilical cord blood cells can successfully be reprogrammed to function like embryonic stem cells, setting the basis for the creation of a comprehensive bank of tissue-matched, cord blood-derived induced pluripotent stem (iPS) cells for off-the-shelf applications, report researchers at the Salk Institute for Biological Studies and the Center for Regenerative Medicine in Barcelona, Spain.

“Cord blood stem cells could serve as a safe, “ready-to-use” source for the generation of iPS cells, since they are easily accessible, immunologically immature and quick to return to an embryonic stem cell-like state,” says Juan-Carlos Izpisúa Belmonte, Ph.D., a professor in the Salk’s Gene Expression Laboratory, who led the study published in the October issue of the journal Cell Stem Cell.

Worldwide, there are already more than 400,000 cord blood units banked along with immunological information. Due to their early origin, cells found in umbilical cord blood contain a minimal number of somatic mutations and possess the immunological immaturity of newborn cells, allowing the HLA donor-recipient match to be less than perfect without the risk of immune rejection of the transplant.

Human leukocyte antigen (HLA) typing is used to match patients and donors for bone marrow or cord blood transplants. HLAs are special surface markers found on most cells in the body and help the immune system to distinguish between “self” and “non-self.” “Selecting common HLA haplotypes from among already banked cord blood units to create iPS cell would significantly reduce the number of cell lines needed to provide a HLA match for a large percentage of the population,” says Izpisúa Belmonte.

Since the first adult cells were converted into iPS cells, they have generated a lot excitement as an uncontroversial alternative to embryonic stem cells and as a potential source for patient-specific stem cells. Unfortunately, taking a patient’s cells back in time is not only costly, but could be difficult when those cells are needed right away to mend injured spinal cords or treat acute diseases, and outright impossible when the effects of aging or chronic disease have irrevocably damaged the pool of somatic cells.

“Patient-specific iPS lines have been advocated as a theoretically ideal clinical option to regenerate tissue but from a practical and cost-benefit aspect, this approach may not be feasible,” says Izpisúa Belmonte. He hopes that the “large scale production and banking of cord blood-derived iPS lines in a publically available network could be a viable alternative for future clinical applications.”

With this in mind, Belmonte and his colleagues set out to transform hematopoietic stem cells isolated from cord blood into iPS cells. They not only successfully converted them using only two out of the four most commonly used factors—OCT4 and SOX2—but also in less time than any other previously published methodology require. No matter, whether the researchers started with freshly collected cord blood or previously frozen samples, the resulting iPS cells were indistinguishable from human embryonic stem cells.

“The population of cord blood cells used for reprogramming express reprogramming/stem cell factors at higher levels than those found in other adult somatic cells, which could explain why cord blood cells can be reprogrammed with less factors and in less time,” says Izpisúa Belmonte. “It’s almost like they are already half-way there.”

In addition, the cord blood-derived iPS cells, CBiPS cells for short, passed all standard tests for pluripotency: The gave rise to stem cell tumors known as teratomas and differentiated into derivatives of the three embryonic tissue layers, including rhythmically beating cardiomyocytes and dopamine-producing neurons.

Izpisúa Belmonte’s next goal is to convince cord blood cells to burn back time using methods that are considered safe for clinical applications in humans. The original protocols for producing iPS cells—including the one used by Belmonte and his team—rely on the integration of foreign “reprogramming” genes into the host-cell genome, a process associated with risks including mutation and the development of cancers after iPS-cell transplantation, limiting their therapeutic value.

But researchers are hard at work to develop alternative methods that allow them to reprogram cells without leaving any genetic traces, such as simply exposing differentiated cells to small molecules. “Several studies have already shown that this could be possible,” says Izpisúa Belmonte. “If we can show they also work for cord blood cells, this certainly could be a step forward towards the clinical application of iPS cells. We should focus our efforts on this particular cell source, CBiPS cells, at least in the near future.”

The Salk Institute for Biological Studies is one of the world's preeminent basic research institutions, where internationally renowned faculty probe fundamental life science questions in a unique, collaborative, and creative environment. Focused on both discovery and mentoring future generations of researchers, Salk scientists make groundbreaking contributions to our understanding of cancer, aging, Alzheimer's, diabetes, and cardiovascular disorders by studying neuroscience, genetics, cell and plant biology, and related disciplines.