UMHS Receives $15 Million Gift, the Largest Ever for Women’s Health 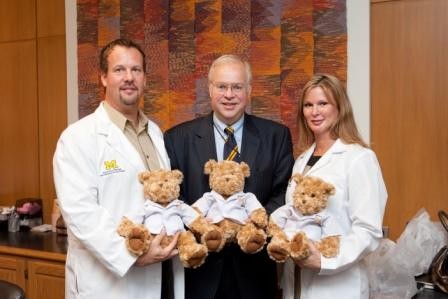 Regents will be asked to approve naming the women’s hospital -- located within the C.S. Mott Children’s Hospital and Women’s Hospital complex -- after Ted and Jane Von Voigtlander

Newswise — The University of Michigan Health System has received a $15 million gift from the Ted and Jane Von Voigtlander Foundation, the largest gift ever made to the Health System for women’s health. It will support the construction of a new women’s hospital.

The gift is being announced today in advance of Thursday’s meeting of the U-M Board of Regents. At that meeting, the board will be asked to approve the naming of the U-M Women’s Hospital after the late Discount Tire Company co-founder and his late wife.

If approved, the new hospital will be known as the University of Michigan Von Voigtlander Women’s Hospital. It is scheduled to open in 2012 as part of the new $754 million C.S. Mott Children’s Hospital and Women’s Hospital complex now under construction.

“My mother would be doing backflips,” says Gwen Haggerty, whose mother, Jane Von Voigtlander established the foundation. “It would mean a lot to my mom and it means a lot to me to be able to give this gift to the hospital for women’s health and to give to the University of Michigan to support women and their families.” Haggerty serves as president of the Foundation, while Steven Bearden serves as director.

“This is an historic capital contribution for women’s health at the University of Michigan, and we are grateful to the Ted and Jane Von Voigtlander Foundation for this gift as well as for the Foundation’s continued support of our efforts to further medical care, training and research,” says U-M President Mary Sue Coleman.

The gift will allow the hospital’s women’s program to continue expanding its excellent care in key areas including fetal diagnosis and therapy, fetal surgery, and care of high risk pregnancy, says Timothy Johnson, M.D., Bates Professor of the Diseases of Women and Children and Chair of Obstetrics and Gynecology at the University of Michigan.

“The new Von Voigtlander Women’s Hospital is going to build on its distinguished past,” Johnson says. “The most important thing that we do is provide unsurpassed patient care, and this gift is going to allow us to expand our services, expand into new space, and grow the technology that we use to provide cutting edge clinical care.”

This environment will allow for top-notch training of medical students, nursing students, residents, and sub-specialty trainees with an opportunity to experience the most innovative technology and techniques under the guidance great teachers, Johnson adds.

"We are thrilled with this extraordinary gift from the Von Voigtlander Foundation," says Patricia A. Warner, associate hospital director and chief administrative officer, C. S. Mott Children's Hospital and Women's Hospital. “This new state-of-the-art facility, with its new treatments and technology, will allow us to continue providing the best obstetric and pediatric patient care in Michigan and across the country. We thank Gwen Haggerty and her parents' foundation for their generosity, support and commitment to women's and children's health."

Haggerty, who is the mother of three children, ages 14, 12, and eight, says the gift to name the women’s hospital is a perfect way to honor the memory of her mother, Jane and her adoptive father Ted, who helped raise her from the age of seven, when her mother and Ted Von Voigtlander met. Ted Von Voigtlander died in 1999.

A native of Tennessee from a family of 10 children, Jane Von Voigtlander was a single mother working as a waitress at Weber’s restaurant in Ann Arbor when she first met Ted, who was then in the early days of building the chain of retail stores Discount Tire Co. It is now one of the largest independent tire dealerships in the country.

Jane, who passed away in 2007 of pancreatic cancer, formed the private, family foundation in 2006 and focused its giving on children, health, medical research, the environment and the arts. She and Gwen Haggerty have made previous donations to the University of Michigan, including a gift to pulmonary medicine and a $2 million gift to the new C. S. Mott Children’s Hospital and Women’s Hospital.

“It’s a wonderful gift and the University of Michigan Health System is very thankful for the generosity found within its community to benefit women’s and children’s health,” says Ora Pescovitz, M.D., executive vice president for Medical Affairs and Health System CEO.

About the Von Voigtlander Women’s Hospital:

The women’s hospital will encompass a birthing center, a perinatal assessment center, a high-risk labor and delivery area, a neonatal intensive care unit, and a fetal surgery program.

The entire children’s hospital and women’s hospital facility is the length of two football fields at 1.1 million square feet and will consist of two conjoined towers – 9-story clinic tower and 12-story inpatient tower - that will bridge inpatient and outpatient services.

The new Women’s Hospital Birth Center will feature 50 large, single labor, delivery and recovery rooms to allow for access of state-of-the-art technologies and interventions, as well as space for families to celebrate the birth of new babies. Deliveries are expected to reach 4,500 per year in the new hospital. The current hospital has 31 private rooms and approximately 3,800 births per year.

The Women’s Birth Center will continue to be uniquely situated with immediate access to the region’s most advanced and sophisticated neonatal intensive care unit.

The U-M Health System has raised $68 million of its $75 million goal for the new building project. Its fund-raising campaign, part of the University-wide $2.5 billion Michigan Difference campaign, which ended in December 2009, is led by Domino's Pizza CEO David Brandon and his wife, Jan, and former-U-M head football coach Lloyd Carr and his wife, Laurie.

In 2006, Dave and Jan Brandon made a gift of $4 million to the University, of which $2 million goes towards the construction of the neonatal intensive care unit (which will be named the Nick and Chris Brandon NICU in recognition of the gift) at the new hospital.

In 2007, Detroit Tigers Brandon Inge gave a $100,000 gift to create an activity area in the pediatric cancer infusion area at the new hospital.

Green Bay Packers Charles Woodson donated $2 million to create a fund for research and for the construction of the hospital project. The lobby will be named after him.

Still, more donations are needed to help support both the building of the facility and the programs, services and amenities that will help children, pregnant women and families from around Michigan and the nation have the best experience while receiving advanced care.

For more information and to lend support to women’s and children’s care, visit: www.umwomenshospital.org.