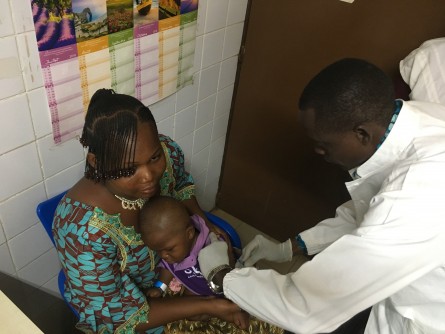 BALTIMORE, MD and OUAGADOUGOU, BURKINA FASO, December 03, 2018 – A new study has been launched in Burkina Faso for Bharat Biotech’s typhoid conjugate vaccine (TCV). It is the second clinical study underway in Africa for the vaccine and the first in West Africa. The vaccine study is a joint effort by the Center for Vaccine Development and Global Health (CVD) at the University of Maryland School of Medicine, (UMSOM) and Groupe de Recherche Action en Santé (GRAS) in Burkina Faso.

Typhoid, a serious enteric fever caused by SalmonellaTyphi, is spread through contaminated food and water. While largely eliminated in industrialized countries, typhoid continues to be a substantial public health issue that disproportionately impacts children and marginalized populations in much of Asia, sub-Saharan Africa, and parts of Latin America and the Middle East.

The study is part of the Typhoid Vaccine Acceleration Consortium (TyVAC), an international consortium working to advance the introduction of TCVs in typhoid-endemic regions. This vaccine is considered to be the most effective in protecting against typhoid because it provides longer-lasting protection and can be administered to children under two years of age, allowing for inclusion in routine immunization programs.

While this new typhoid vaccine has recently been recommended by the World Health Organization (WHO) there are no data on co-administration of the TCV with other routine vaccines. Researchers will study the efficacy in Burkinabe children and how their immune systems respond to the vaccine when given with other vaccines, such as yellow fever and meningitis A vaccines.

“This is an important collaboration with our partners in Burkina Faso to test this vaccine in the West African setting,” said Kathleen Neuzil, MD, MPH, UMSOM Professor of Medicine and Pediatrics and Director of the CVD and TyVAC Principal Investigator. “Millions of children are set to be better protected from typhoid fever through the broader global efforts to accelerate the use of the vaccine in conjunction with improving water, sanitation and hygiene.”

The Burkina Faso study comes after the WHO pre-qualified the vaccine in 2017 and as GAVI, the Vaccine Alliance, committed U.S. $85 million in funding to help introduce a TCV typhoid-endemic countries.

“We are very enthusiastic about this opportunity to study the TCV and anticipate that the data from this study will inform decision-makers in the region highly affected by typhoid,” said Sodiomon B Sirima, MD, PhD, the Scientific Director of GRAS and Co-Principal Investigator of the study onsite in Ouagadougou.

The burden of typhoid is likely underestimated due to difficulties in surveillance and diagnostic challenges, but current estimates indicate that each year there are nearly 12 million cases and more than 128,000 deaths, with young children and adolescents aged 2 to 15 years disproportionately impacted. Though treatable with antibiotics, the rate of cases resistant to the available antibiotics is increasing. Vaccination and improvements in water, sanitation, and hygiene are key components of an integrated strategy to prevent typhoid.

About the Burkina Faso Study

Data from the study are expected to help inform policymakers about implementing a mass TCV campaign in Burkina Faso, which was the very first country to conduct a successful mass vaccination campaign against meningitis A.

Burkina Faso has a well-established research infrastructure, an ongoing typhoid surveillance program, and a history of early introduction of WHO pre-qualified vaccines. From 2011 to 2014, Burkina Faso was part of the International Vaccine Institute Typhoid Surveillance in Africa Program (TSAP), which showed a significant burden of typhoid in the country.

Testing the vaccine in West Africa is important given differences in population characteristics such as malnutrition and HIV prevalence, as well as the epidemiology and differing strains, attack rates and severity of typhoid.

The Typhoid Vaccine Acceleration Consortium (TyVAC), is led by UMSOM’s CVD, the Oxford Vaccine Group at the University of Oxford, and PATH. It is funded by the Bill & Melinda Gates Foundation.

TyVAC works closely with local and global partners to accelerate the introduction of TCVs in low-income countries and facilitate access to typhoid vaccines in the most at-risk and marginalized communities. Using a multidisciplinary approach—at the global level, TyVAC works closely with WHO, Gavi, and other stakeholders to ensure there are sufficient data and evidence to inform global guidelines, financing decisions, and a sustainable vaccine supply. Similarly, TyVAC works with local partners to support program preparation and ensure evidence-based policy decisions. TyVAC assesses existing data and generates new evidence related to typhoid disease burden, antimicrobial resistance, cost-effectiveness, health impact analyses, and regional data on TCVs. Country-level analyses help quantify the  cost and economic value of vaccines and inform decision makers at the national level. TyVAC is committed to ensuring that prevention and control of typhoid is a global health priority. TyVAC is working with partners to take an integrated approach that includes TCVs with improved water, sanitation, and hygiene, to mitigate the substantial and detrimental impact of typhoid.

About the UMSOM Center for Vaccine Development and Global Health

CVD’s research covers the broader goal of improving global health by conducting innovative, leading research in Baltimore and around the world. CVD researchers are developing new and improved ways to diagnose, prevent, treat, control, and eradicate diseases of global impact. Currently, these diseases include malaria, typhoid, shigella and vaccine-preventable infectious diseases. CVD researchers have been involved in critical vaccine development for emerging pathogens such as Zika and Ebola. In addition, CVD’s work focuses on the ever-growing challenge of anti-microbial resistance.

GRAS is a medical research institute existing under the laws of Burkina Faso, operating in the field of human health since 2008 with a focus on clinical research. Its main offices are located in Ouagadougou, the capital of Burkina Faso and its main missions are among others to design, carry out clinical research, operational and fundamental studies so that to identify new tools for the control of target diseases and monitoring the effectiveness of the existing one; toperform the design, the implementation and the monitoring-evaluation of health programmes and projects; and to strengthen professional skills through training and assistance of teams in the conduct of clinical research.

The scientific staff of GRAS is multidisciplinary with well proven skills in clinical trials. The staff has a sound knowledge of ethical principles in research involving human subjects and on ICH GCP. Laboratory staff are certified for the shipment of dangerous goods. The Data Manager has strong experience with several data management software. IT features a real-time management system for clinical trials data with a system network and an internet broadband access, and a data archiving system according to GCP. GRAS has a well-established cold chain. The main clinical trial unit of GRAS is embedded in a tertiary hospital located in Ouagadougou which provide out and in patients cares, maternal and child health services and emergency services. The hospital also provide services such ultrasound, X-ray and magnetic resonance imaging and has a medical laboratory well-equipped engaged in an external quality control program as part of its commitments to quality. The trial unit space is organized to ensure that all the key steps in the path of clinical trial participant journey have a dedicated space (consenting rooms, clinical examination rooms, biological sampling room, IP preparation and administration rooms post vaccination surveillance room well-equipped for resuscitation). GRAS has access to the Ouagadougou Health and Demographic Surveillance System (HDSS) which is a real asset for the conduct of epidemiological and clinical trials. It covers about 90,000 inhabitants, established in 2008 in five neighborhoods (two formal and three informal settlements or slums) of Ouagadougou, located roughly at 2 kilometers of the clinical unit of GRAS.During the last decade, scientists from GRAS in collaboration with its national and international partners have carried out several epidemiological studies, health system research, drugs and vaccines trials from phase 1 to phase 4 and for various diseases such as malaria, pneumonia, sickle cell diseases, and hepatitis.

Now in its third century, the University of Maryland School of Medicine was chartered in 1807 as the first public medical school in the United States. It continues today as one of the fastest growing, top-tier biomedical research enterprises in the world -- with 43 academic departments, centers, institutes, and programs; and a faculty of more than 3,000 physicians, scientists, and allied health professionals, including members of the National Academy of Medicine and the National Academy of Sciences, and a distinguished recipient of the Albert E. Laser Award in Medical Research.  With an operating budget of more than $1 billion, the School of Medicine works closely in partnership with the University of Maryland Medical Center and Medical System to provide research-intensive, academic and clinically-based care for more than 1.2 million patients each year. The School has over 2,500 students, residents, and fellows, and more than $530 million in extramural funding, with most of its academic departments highly ranked among all medical schools in the nation in research funding. As one of the seven professional schools that make up the University of Maryland, Baltimore campus, the School of Medicine has a total workforce of nearly 7,000 individuals. The combined School and Medical System (“University of Maryland Medicine”) has an annual budget of nearly $6 billion and an economic impact more than $15 billion on the state and local community. The School of Medicine faculty, which ranks as the 8thhighest among public medical schools in research productivity, is an innovator in translational medicine, with 600 active patents and 24 start-up companies. The School works locally, nationally, and globally, with research and treatment facilities in 36 countries around the world. Visit medschool.umaryland.edu/