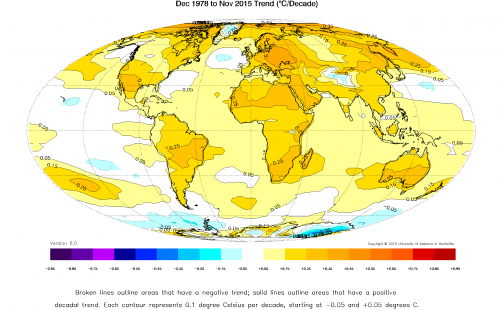 The average temperature of Earth’s atmosphere has warmed just over four tenths of a degree Celsius (almost three fourths of a degree Fahrenheit) during the past 37 years, with the greatest warming over the Arctic Ocean and Australia, said Dr. John Christy, director of the Earth System Science Center at The University of Alabama in Huntsville. Microwave sounding units on board NOAA and NASA satellites completed 37 complete years of collecting temperature data in November, giving us nearly global coverage of climate change during that time.

If that trend was to continue for another 63 years, the composite warming for the globe would be 1.1 C (about 2 degrees Fahrenheit) for the century, Christy said. That would put the average global temperature change over 100 years well under the 2.0 C (3.6 degrees F) goal set recently at the climate change summit in Paris.

Due in part (but not exclusively) to the ongoing El Niño Pacific Ocean warming event, the global temperature trend has been trending slightly warmer over the past several months, Christy said. While the current global trend is just under 0.115 C (rounded down to 0.11), he expects the trend line to cross 0.115 C in the next several months, raising the global trend to 0.12 C per decade.

While a 0.12 C trend isn’t exactly a sprint to climate catastrophe (the 1.2 C or 2.2 degrees F rise over 100 years would be roughly equal to the warming seen most spring days between 10 a.m. and noon), it nonetheless has been a steady trend for the past several years. Take away the random variations caused by warm and cold weather systems, and any long-term trend, no matter how small, will produce climate records on a regular basis. Add to that long-term warming the additional heat of a large El Niño, and record-setting monthly average temperatures should be both routine and expected.

Despite that, early indications are that 2015 will end as the third warmest year in the satellite temperature record, behind 1998 and 2010. That is the early indication. Typically, the warmest temperatures are seen in the second year of an El Niño warming event, although there have been exceptions. If the typical pattern holds true, the second year of the current El Niño would be expected to bring more record high temperatures in 2016, perhaps including a new record high temperature for the year.