Can we empower kids to choose healthy foods? 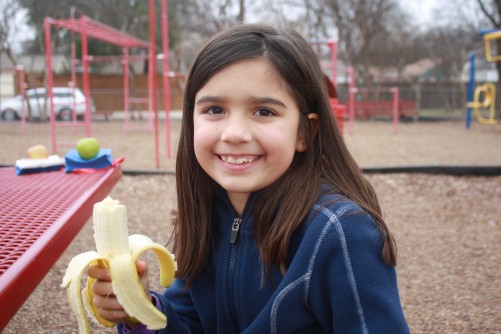 If we advertise healthy foods, will kids eat them?

Newswise — Kids who meander down the halls of Stonewall Jackson Elementary in Dallas see banners and posters about healthy eating. They get to dig in a garden that produces food they can eat. Their pocket-change goes to fund-raisers that feature “fruit kabobs” and yogurt.

For Principal Michele Hill, these are all signs of healthy food marketing – and part of the larger tide of change, prompted by new federal rules, that has been washing over school systems across the country. It aims to reduce junk food and the marketing that promotes it.

“We need to take care of kids and empower them to make decisions for themselves, as they grow and outside the school environment,” Hill said. “As a school and as parents, we need to give them the tools to make their choices.”

The United States Department of Agriculture began revamping nutrition standards for school meals in the 2010 Healthy Hunger-Free Kids Act. It was the first national update in 15 years. Schools are now required to come up with wellness plans and provide meals with more fruits, vegetables and whole grains, while limiting the amount of sodium, fat and calories. The USDA says 86 percent of schools are complying.

Now, comes the next step with new USDA proposals about snacks and junk food promotions in schools. With a public comment period ending April 28, the rules would allow only ads and marketing for food that meet the new nutrition guidelines.

Voices for Healthy Kids, a joint initiative of the Robert Wood Johnson Foundation and American Heart Association, has been encouraging partners around the country to comment on the proposal. Smart School Foods – boosting the nutrition in snack foods and beverages – is one of the initiative’s six primary goals.

The new standards, which could be in place in the 2014-15 school year, also affect the foods sold through vending machines, snack bars and a la carte in cafeterias. So, branded images for sugary sodas on vending machines, posters and cups would no longer be allowed.

Some areas already have acted. Several school districts, including Seattle and San Francisco, have adopted broad commercial-free policies that address marketing across the board – not just of food and beverages.

“We are moving in the right direction,” said Jessica Donze Black, director of the Kids’ Safe and Healthful Foods Project, a partnership between The Pew Charitable Trusts and the Robert Wood Johnson Foundation. The group is spreading the word about the rules, and making sure agencies and schools have enough resources, materials and training necessary to carry it out.

“This is going to raise the bar for all schools,” Black said. “And it’s a little bit of a culture shift in how people think” about food in schools. According to the Federal Trade Commission, food and beverage companies spent $149 million to market their products in schools in 2009. Advertising for sodas and other sugary drinks made up more than 90 percent of that spending, followed by fast food.

A recent study in the American Medical Association’s journal, Pediatrics, says nearly two-thirds of elementary school children receive a barrage of commercial messages about junk food and are spurred on by money-producing programs such as coupon and voucher incentives sponsored by pizza companies, fast-food restaurants and candy-makers. Read a certain amount of books; get a pizza prize. Sell candy bars; raise money for the parent organization.

Hill said she is approached constantly about selling candy bars or flavored popcorn in her school. “It’s so easy,” she says. “If we did that, we would get 50 percent of the proceeds. But what is the cost, the long-term cost to these kids?”

Instead, she looks at the new rules as an opportunity to have an all-inclusive approach to wellness for children, including physical education, nutrition, and social and emotional health. At Stonewall Jackson Elementary, that means a compost bin in the cafeteria; recess before lunch so students aren’t rushing through meals to get to the playground; and using a grant-supported garden to teach math and water conservation.

Advertising revenue isn’t as much of a boost for schools as it might seem, according to a 2012 report by consumer group Public Citizen, which studied large school districts across the country. “Few districts manage to raise more than a fraction of 1 percent of their total operating budgets from advertising schemes,” the study concluded.

Whether or not you agree with the concept of marketing in schools, “people tend to really understand the concept that you shouldn’t be able to market foods that aren’t sold in the schools,” says Sabrina Adler, staff attorney for ChangeLab Solutions. The group provides draft laws and policy help for an array of health issues, including childhood obesity.

Adler says the latest rule, with other changes to the Healthy Hunger-Free Kids Act, should be a prompt for schools to look at the bigger picture.

It’s looking holistically at the environment these kids are in and what messages are being sent,” she says. “What is being talked about in the classroom, and thinking about how all these things affect each other.”

It’s exactly the kind of thinking Hill has been doing. She realizes change already has been moving across the country, and says, “Our goal is to see kids learn how they can do these things at home and in the world.”

This article may be reproduced in whole are parts with attribution to the American Heart Association. For more articles, visit www.heart.org