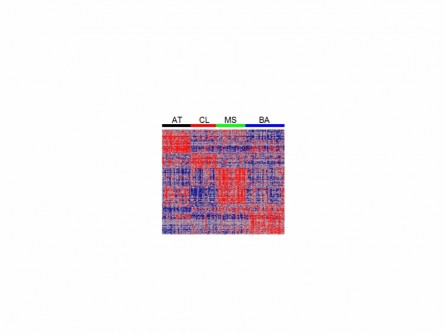 Newswise — CHAPEL HILL, N.C. - Head and neck squamous cell carcinoma (HNSCC) is the seventh most common form of cancer in the United States, but other than an association with the human papillomavirus, no validated molecular profile of the disease has been established. By analyzing data from DNA microarrays, a UNC-led team has completed a study that confirms the presence of four molecular classes of the disease and extends previous results by suggesting that there may be an underlying connection between the molecular classes and observed genomic events, some of which affect known cancer genes. The clinical relevance of the classes and certain genomic events was demonstrated, thus paving the way for further studies and possible targeted therapies.

Neil Hayes, MD, MPH, associate professor of medicine and senior author, says, “Cancer is a disease caused by alteration in the DNA and RNA molecules of tumors. A cancer results when broken molecules initiate a cascade of abnormal signals that ultimately results in abnormal growth and spread of tissues that should be under tight control within the body.

“However, most common tumors, including head and neck cancer, have relatively little information in the public record as to how these signals coordinate to create different patterns of abnormalities. This study is among the largest ever published to document reproducible molecular tumor subtypes. Subtypes, such as those we describe, represent attractive models to understand and attack cancers for treatment and prognosis.”

Dr. Hayes is a member of UNC Lineberger Comprehensive Cancer Center and national co-chair of the Data Analysis Sub-Group for The Cancer Genome Atlas, a program of the National Institutes of Health.

In spite of being the seventh most common form of cancer in the United States, HNSCC is relatively under-studied in comparison to other tumor types, e.g. breast and lung. By leveraging the similarities found in the gene expression subtypes, the results of this study provide a connection to a range of well-established findings and additional insight into the disease.

Funding for the study was provided by a Clinical/Translational Award from the UNC Lineberger Comprehensive Cancer Center, the University Cancer Research Fund, and a grant from the National Institutes of Health (K12-RR-023248).