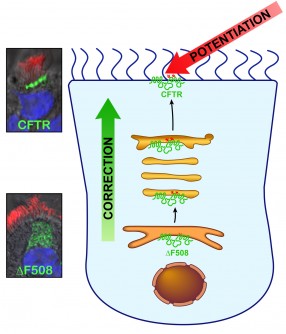 Drugs that address the most common underlying causes of CF must correct proteins and then activate them. UNC research shows that two new drugs do not achieve this in tandem. 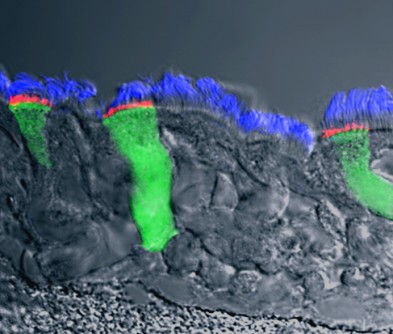 Epithelial cells (green) with cilia (blue) and CFTR in red.

The finding, published today in the journal Science Translational Medicine, shows how a mutant CFTR protein becomes unstable and loses its ability to function properly when in the presence of the two drugs. The research offers several insights into how novel CF pharmacotherapies could be improved.

“In our human airway epithelial model system, one of the drugs destabilizes and deactivates the protein that the other drug tries to correct,” said Martina Gentzsch, PhD, an assistant professor of cell biology and physiology and senior author of the UNC Science Translational Medicine paper. “Our data suggest that drug developers should take this destabilization effect into account in order to alleviate CF symptoms to a greater degree.”

People with cystic fibrosis have two faulty copies of the CFTR gene. In one type of mutation, patients don’t have enough CFTR proteins that transit normally to the cell surface. In other patients, mutant CFTR proteins that do transit to the cell surface don’t function properly. Both genetic mutations lead to poor mucus clearance from lungs, chronic lung infections, bouts of inflammation, and a decreased ability to breathe properly, among other symptoms.

Scientists create compounds called “correctors” to fix the CFTR proteins so that proper amounts transit to the cell surface where they can serve as chloride channels to help maintain a well-hydrated airway. Scientists also create compounds called “potentiators” to activate the CFTR channels at the cell surface to maintain the proper balance of electrolytes in fluids, including those found inside lungs.

However, the vast majority of CF patients have the “transit” mutation and insufficient CFTR proteins at the cell surface; these patients may need a corrector and a potentiator.

In Gentzsch’s study, UNC postdoctoral fellow Deborah Cholon, PhD, conducted lab experiments using tissue samples from CF patients who have the most common CFTR “transit” genetic mutation (ΔF508). Gentzsch’s team grew cultured CF epithelial cells in an environment that mimicked a human lung. Then the researchers treated the cells for two days with a corrector compound called VX-809, also known as lumacaftor. They observed that the amount of CFTR protein transiting the cell surface appropriately increased. But when they acutely (in seconds) added the potentiator VX-770, the corrected CFTR protein exhibited a brief increase in function that rapidly waned, a sign that the corrected CFTR protein was losing its ability to function as an ion channel.

In a separate experiment, Gentzsch’s team treated the CF cells for two days with a potentiator and a corrector at the same time; this is how a drug would be given to patients. Gentzsch found that the potentiator compound chronically destabilized the CFTR protein, and that the destabilization was dependent upon the dose of VX-770. That is, the experiments showed that the potentiator cancelled out the intended effect of having a corrected CFTR protein at the epithelial surface.

“The result was striking,” Gentzsch said. “The potentiator acted like an inhibitor of the corrector compound. We could see the corrected CFTR protein disappearing.”

The findings come one month after results from a clinical trial showed that the two-drug approach increased lung function in CF patients by 2.2 to 3.6 percent. This result was statistically significant, but Charles Esther, MD, PhD, a clinical associate professor and one of the UNC coauthors, said that it would be difficult for many CF patients to perceive this level of improved lung function on a day-to-day basis. However, Esther and the UNC coauthors, who were not involved in the clinical trial, said that a statistically significant increase in lung function is thought to lead to fewer CF-related flare-ups over the course of a year.

Data from the clinical trial did show that the combination therapy substantially decreased the number of pulmonary exacerbations and hospitalizations, while also beneficially increasing the weight of CF patients. Gentzsch, Esther, and the UNC coauthors of the Science Translational Medicine paper agree that these clinical outcomes are promising and set the stage for new therapies for CF patients.

Gentzsch noted potential reasons to explain why patients in the clinical trial saw benefit from the two drugs even though her team’s lab experiments produced evidence to the contrary. First, the destabilizing effects of VX-770 on the corrected CFTR protein might be less robust in the human body than were the effects seen in lab tests using human lung cells. In addition, cell culture studies lasted two days in Gentzsch’s study, whereas the clinical studies lasted for months.

Gentzsch also said that the drugs may produce beneficial effects by mechanisms unrelated to correcting the mutant CFTR protein. For example, Gentzsch’s team found that VX-770 can decrease the function of a sodium channel in CF epithelial cells and other cells. Researchers also have found that VX-770 has antibacterial properties.

“The trial is important for gene research and may be a proof of principle that targeting the most common mutation in cystic fibrosis is an effective approach for treatment of most patients,” Gentzsch said. “But evidence of corrective effects on CFTR in the clinic requires further study. And we think that many people with CF need therapies that improve their health to a greater degree. We hope that our studies will help in this endeavor.”

This research was funded by the National Institutes of Health, the Cystic Fibrosis Foundation, and the Else Kröner-Fresenius-Stiftung.Other authors of the study include: UNC research specialists Nancy L. Quinney and Leslie Fulcher; UNC postdoctoral fellow Jhuma Das, PhD; Nikolay Dokholyan, PhD, the Michael Hooker Distinguished Professor of Biochemistry and Biophysics; Scott Randell, PhD, Associate Professor of Cell Biology and Physiology; and Richard Boucher, MD, the Director of the UNC Marsico Lung Institute and the James C. Moeser Eminent Distinguished Professor of Medicine. 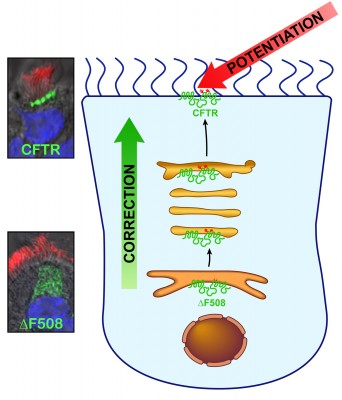 Caption: Drugs that address the most common underlying causes of CF must correct proteins and then activate them. UNC research shows that two new drugs do not achieve this in tandem. 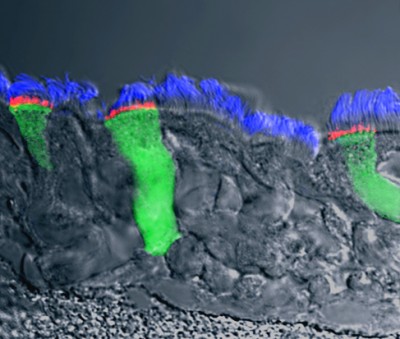