The discovery offers insights for the creation of better, more targeted therapies for various forms of cancer. 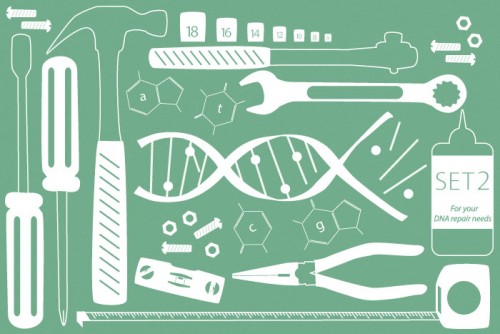 UNC researchers found that Set2 is needed for DNA repair. When mutated, the human version--SETD2--plays a role in kidney cancer.

Newswise — CHAPEL HILL, N.C. – Twelve years ago, UNC School of Medicine researcher Brian Strahl, PhD, found that a protein called Set2 plays a role in how yeast genes are expressed – specifically how DNA gets transcribed into messenger RNA. Now his lab has found that Set2 is also a major player in DNA repair, a complicated and crucial process that can lead to the development of cancer cells if the repair goes wrong.

“We found that if Set2 is mutated, DNA repair does not properly occur” said Strahl, professor of biochemistry and biophysics. “One consequence could be that if you have broken DNA, then loss of this enzyme could lead to downstream mutations from inefficient repair. We believe this finding helps explain why the human version of Set2 – which is called SETD2 – is frequently mutated in cancer.”

The finding, published online June 9 in the journal Nature Communications, is the first to show Set2’s role in DNA repair and paves the way for further inquiry and targeted approaches to treating cancer patients.

In previous studies, including recent genome sequencing of cancer patients, human SETD2 has been implicated in several cancer types, especially in renal cell carcinoma – the most common kind of kidney cancer. SETD2 plays such a critical role in DNA transcription and repair that Strahl is now teaming up with fellow UNC Lineberger Comprehensive Cancer Center members Stephen Frye, PhD, director of the UNC Center for Integrative Chemical Biology and Drug Discovery (CICBDD), Jian Jin, PhD, also with the CICBDD, and Kim Rathmell, MD, PhD, an associate professor in the department of genetics. Their hope is to find compounds that can selectively kill cells that lack SETD2. Such personalized medicine is a goal of cancer research at UNC and elsewhere.

In recent years, scientists have discovered the importance of how DNA is packaged inside nuclei. It is now thought that the “mis-regulation” of this packaging process can trigger carcinogenesis. This realm of research is called epigenetics, and at the heart of it is chromatin – the nucleic acids and proteins that package DNA to fit inside cells.

Proper packaging allows for proper DNA replication, prevents DNA damage, and controls how genes are expressed. Typically, various proteins tightly regulate how these complex processes happen, including how specific enzyme modifications occur during these processes. Some proteins are involved in turning “on” or turning “off” these modifications. For instance, protein and DNA modifications involved in gene expression in kidneys must at some point be turned off.

In 2002, Strahl found that Set2 in yeast played a role as an off switch in gene expression – particularly when DNA is copied to make RNA. Now, Strahl’s team found that Set2 also regulates how the broken strands of DNA – the most severe form of DNA damage in cells – are repaired. If DNA isn’t repaired correctly, then that can result in disastrous consequences for cells, one of them being increased mutation that can lead to cancer.

Through a series of biochemical and genetic experiments, Deepak Jha, a graduate student in Strahl’s lab, was able to see what happens when cells experience a break in the double-strand of DNA.

“We found that Set2 is required when cells decide how to repair the break in DNA,” said Jha, the first author of the Nature Communications paper. He said that the loss of Set2 keeps the chromatin in a more open state – not as compact as normal. This, Strahl said, leaves the DNA at greater risk of mutation. “This sort of genetic instability is a hallmark of cancer biology,” Jha said.

Strahl and Jha said they still don’t know the exact mechanism by which Set2 becomes mutated or why its mutation affects its function. But that’s the subject of their next inquiry. They are now collaborating with Rathmell and Ian Davis, also members of UNC Lineberger Comprehensive Cancer Center, to study how the human protein SETD2 is regulated and how its mutation contributes to cancer.

Strahl said, “We think this work will lead to a greater understanding of cancer biology, and open the door to future therapeutic approaches for patients in need of better treatment options.”

This research was funded through a grant from the National Institutes of Health.