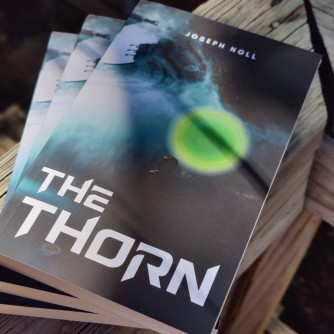 Newswise — Michael Nolting, a business major at UNC who just finished his freshman year, is sharing his dream with the world — and it’s no ordinary dream. It’s one that came to him more than four years ago in a deep sleep, involving an apocalyptic alien invasion that he never quite got out of his mind.

“I woke up and said, ‘that was a crazy dream.’ I could see it being a movie,” Nolting said.

Confident in his imagination, if not his writing skills, and perhaps a little drawn by the business instincts he already possessed, he began putting pen to paper a couple of years ago in the hopes of selling that story. Eleven drafts later, Nolting is a 19-year-old college student with his first self-published novel,The Thorn, under his belt. The story is a young adult science fiction fantasy about a hostile alien invasion taking over the planet, just like his dream from many, many nights ago.

“The Thorn follows Lylon, a high school senior living his best life,” Nolting said. “He is the valedictorian, has supportive parents and is in a relationship. Then, one day aliens arrive, and he has to navigate a new apocalyptic world.”

The twisting plot introduces a form of magic that can bring people back from the dead, but the theme of the book is more practical; it dives into the agony of making challenging decisions, which is something Nolting is no stranger to. After being diagnosed in the third grade with Dyslexia, a learning disorder that makes reading and writing difficult,  Nolting decided he wasn’t going to let his hardship keep him from achieving his goals.

“I used to mix up words and fell behind in English and reading at a young age, so, my school put me in multisensory teaching approach (MTA) classes for the remainder of my elementary years,” Nolting said. “It made me not enjoy the subjects, I didn’t want to do them. I always had to write in cursive in those classes and I hated writing in cursive. It was hard.”

It wasn’t until Nolton’s senior year in high school, two years after he had the vivid alien invasion dream locked into his brain that he started to enjoy reading and writing and he has his English teacher to thank.

“The very first paper I got back in their class I received a 96% and I thought ‘wow, I actually did pretty well on that,’ and my professor said ‘yeah, you’re a good writer,” Nolting said. “That immediately built up my confidence in writing.”

That boost of confidence was enough to push away the doubt he felt in elementary school and solidified his desire to write a book. The timing posed some problems, though.

“I was balancing writing, schoolwork and playing on the UNC club tennis team,” Nolting said. “It was hard to juggle all of that, but it was important for me to make time for it all.”

Now that the book is published, Nolting can enjoy some free time, though not much as he is currently writing his next creation, the first book in a series of four. Nolting got the itch to continue tapping into his creative side after seeing how well The Thorn was received.

“I heard that my elementary dyslexia teacher started reading The Thorn to her students with dyslexia and people told my mom their kids with dyslexia read it too and were inspired by my story,” Nolting said. “That has been really touching.”

Nolting recognizes how much he has grown through the writing process and like his main character in The Thorn, despite how challenging situations may seem, he’ll continue to decide to persevere.

“After all of those years I said I hated English and now I can say I’m a published author,” Nolting said. “I’m proud of that —that’s pretty cool.”

The Thorn is available at Walmart and Barnes and Noble. Within a month of publication, nearly 50 copies have been sold. Nolting writes under the pen name Joseph Noll.