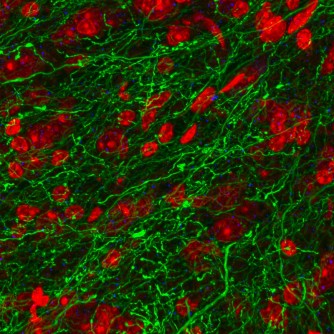 Microscopy image showing inhibitory fibers from the BNST that innervate the VTA. Stimulation of these fibers (green) produce rewarding and anti-anxiety phenotypes in mice.

The findings could lead to new mental health therapies for disorders such as addiction, anxiety, and depression. A report of the research was published online by the journal, Nature, on March 20, 2013.

Located deep in the brain’s temporal lobe are tightly packed clusters of brain cells in the almond shaped amygdala that are important for processing memory and emotion. When animals or people are in stressful situations, neurons in an extended portion of the amygdala called the bed nucleus of the stria terminalis, or BNST, become hyperactive.

But, almost paradoxically, neurons in the BNST, which modulate fear and anxiety, reach into a portion of the midbrain that’s involved in behavioral responses to reward, the ventral tegmental area, or VTA.

“For many years it’s been known that dopamine neurons in the VTA are involved in reward processing and motivation. For example, they’re activated during exposure to drugs of abuse and naturally rewarding experiences,” says study senior author Garret Stuber, PhD, assistant professor in the departments of psychiatry and cell biology & physiology, and the UNC Neuroscience Center. “On the one hand, you have this area of the brain – the BNST – that’s associated with aversion and anxiety, but it’s in direct communication with a brain reward center. We wanted to figure out exactly how these two brain regions interact to promote different types of behavioral responses related to anxiety and reward.”

In the past, researchers have tried to get a glimpse into the inner workings of the brain using electrical stimulation or drugs, but those techniques couldn’t quickly and specifically change only one type of cell or one type of connection. But optogenetics, a technique that emerged about seven years ago, can.

In the technique, scientists transfer light-sensitive proteins called “opsins” – derived from algae or bacteria that need light to grow – into the mammalian brain cells they wish to study. Then they shine laser beams onto the genetically manipulated brain cells, either exciting or blocking their activity with millisecond precision.

First, Stuber and colleagues used optogenetics for “photo-tagging,” to optically identify different types of neurons in vivo. This enabled them to identify a neuron in the BNST that’s projecting into the VTA. “So we know the neuron is directly interfacing with a reward-related brain region,” Stuber says.

They then exposed animals (mice) to a mild aversive stimulus, a carefully controlled but anxiety-provoking foot shock delivered repeatedly and unpredictably. The BNST neurons projecting into the VTA showed changes in their firing rate, “But some cells would increase their activity and other would suppress their firing,” Stuber says, adding that it suggested there are functionally distinct populations of neurons within the BNST that are projecting to the VTA, thus highlighting the complexity of this neural circuit.

Stuber and his team then repeated the experiment, but this time optically identified BNST neurons that project to the VTA as either excitatory or inhibitory cells, by integrating the approach they developed with the use of transgenic animals that allows for precise targeting of distinct neuronal cell types. The glutamate (excitatory) neurons were the cell population that increased their activity in response to the foot shocks. And the GABAergic (inhibitory) cells showed activity suppression during foot shock.

Finally, the researchers found that stimulating either of these brain cell pathways had opposing behavioral consequences. The glutamate neurons provoked an aversive, avoidance behavioral response and promoted anxiety-like behavior in the mice. In contrast, when Stuber’s team activated the GABAergic pathway projections from the BNST into the VTA, the animals showed reward-associated behaviors and less anxiety. They preferred that stimulation and would spend more time in the area of the cage where they had received it.

“If you activated the GABA cells, they showed less anxiety. And when we exposed them to foot shock and at the same time activated this GABAergic pathway, it actually reduced the anxiety-associated behavioral consequences of that otherwise “aversive” stimulation,” Stuber says.

“Because these cells are functionally and genetically distinct from each other, our findings also point to new potential targets for therapeutic interventions in neuropsychiatric disorders associated with alterations in motivated states such as addiction.

Along with Stuber, UNC study co-authors from the department of psychiatry are Joshua H. Jennings, Dennis R. Sparta, Alice M. Stamatakis and Randall L. Ung. Other co-authors on this study include Kristen E. Pleil and Thomas L. Kash who are affiliated with the department of pharmacology, and the Bowles Center for Alcohol Studies.

Support for the study comes from the National Institutes of Health, the Whitehall Foundation, and the Foundation of Hope.