Uncovering Clues to the Genetic Cause of Schizophrenia 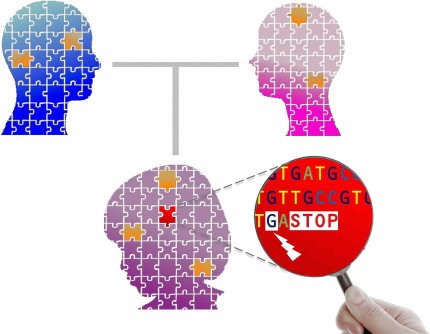 Taking a closer look at severe loss-of-function mutations revealed the contribution of both inherited (yellow pieces) and new (red piece) mutations to the puzzling genetic architecture of schizophrenia.

Newswise — NEW YORK, NY (May 28, 2014) — The overall number and nature of mutations—rather than the presence of any single mutation—influences an individual’s risk of developing schizophrenia, as well as its severity, according to a discovery by Columbia University Medical Center researchers published in the latest issue of Neuron. The findings could have important implications for the early detection and treatment of schizophrenia.

Maria Karayiorgou, MD, professor of psychiatry and Joseph Gogos, MD, PhD, professor of physiology and cellular biophysics and of neuroscience, and their team sequenced the “exome”—the region of the human genome that codes for proteins—of 231 schizophrenia patients and their unaffected parents. Using this data, they demonstrated that schizophrenia arises from collective damage across several genes.

“This study helps define a specific genetic mechanism that explains some of schizophrenia's heritability and clinical manifestation,” said Dr. Karayiorgou, who is acting chief of the Division of Psychiatric and Medical Genetics at the New York State Psychiatric Institute. “Accumulation of damaged genes inherited from healthy parents leads to higher risk not only to develop schizophrenia but also to develop more severe forms of the disease.”

Schizophrenia is a severe psychiatric disorder in which patients experience hallucination, delusion, apathy and cognitive difficulties. The disorder is relatively common, affecting around 1 in every 100 people, and the risk of developing schizophrenia is strongly increased if a family member has the disease. Previous research has focused on the search for individual genes that might trigger schizophrenia. The availability of new high-throughput DNA sequencing technology has contributed to a more holistic approach to the disease.

The researchers compared sequencing data to look for genetic differences and identify new loss-of-function mutations—which are rarer, but have a more severe effect on ordinary gene function—in cases of schizophrenia that had not been inherited from the patients’ parents. They found an excess of such mutations in a variety of genes across different chromosomes.

Using the same sequencing data, the researchers also looked at what types of mutations are commonly passed on to schizophrenia patients from their parents. It turns out that many of these are “loss-of-function” types. These mutations were also found to occur more frequently in genes with a low tolerance for genetic variation.

“These mutations are important signposts toward identifying the genes involved in schizophrenia,” said Dr. Karayiorgou.

The researchers then looked more deeply into the sequencing data to try to determine the biological functions of the disrupted genes involved in schizophrenia. They were able to verify two key damaging mutations in a gene called SETD1A, suggesting that this gene contributes significantly to the disease.

The finding fits with accumulating evidence that damage to chromatin regulatory genes is a common feature of various psychiatric and neurodevelopmental disorders. By combining the mutational data from this and related studies on schizophrenia, the authors found that “chromatin regulation” was the most common description for genes that had damaging mutations.

“A clinical implication of this finding is the possibility of using the number and severity of mutations involved in chromatin regulation as a way to identify children at risk of developing schizophrenia and other neurodevelopmental disorders,” said Dr. Gogos. “Exploring ways to reverse alterations in chromatic modification and restore gene expression may be an effective path toward treatment.”

In further sequencing studies, the researchers hope to identify and characterize more genes that might play a role in schizophrenia and to elucidate common biological functions of the genes.

New York State Psychiatric Institute (founded in 1896) and the Columbia University Department of Psychiatry have been closely affiliated since 1925. Their co-location in a New York State facility on the NewYork-Presbyterian/Columbia University Medical Center campus provides the setting for a rich and productive collaborative relationship among scientists and physicians in a variety of disciplines. Columbia Psychiatry/NYSPI are ranked among the best departments and psychiatric research facilities in the nation and have contributed greatly to the understanding of and current treatment for psychiatric disorders. The Department and Institute are home to distinguished clinicians and researchers noted for their clinical and research advances in the diagnosis and treatment of depression, suicide, schizophrenia, bipolar and anxiety disorders and childhood psychiatric disorders. Their combined expertise provides state of the art clinical care for patients, and training for the next generation of psychiatrists and psychiatric researchers. Visit nyspi.org and columbiapsychiatry.org for more information.