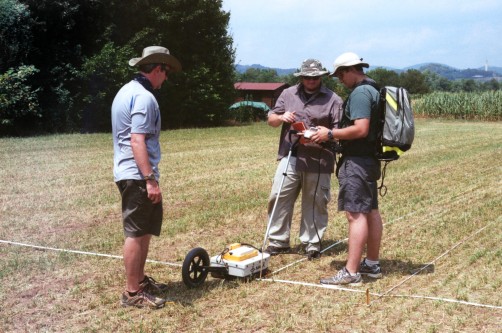 Using archaeological expertise and modern technology, a University of Kentucky team led by Paolo Visonà and George Crothers discovered a Roman settlement and possible prehistoric site in northern Italy. To map structures below the surface, Crothers and UK students used a magnetometer and ground penetrating radar. 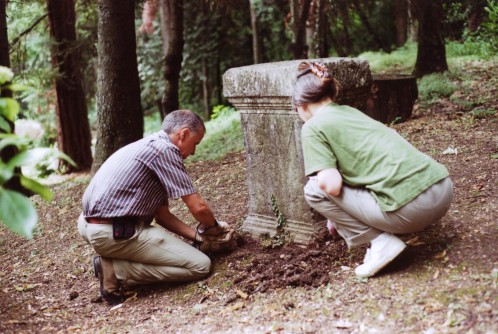 Paolo Visonà, of the University of Kentucky, works with an Italian archaeologist to uncover the base of a Roman funerary altar. 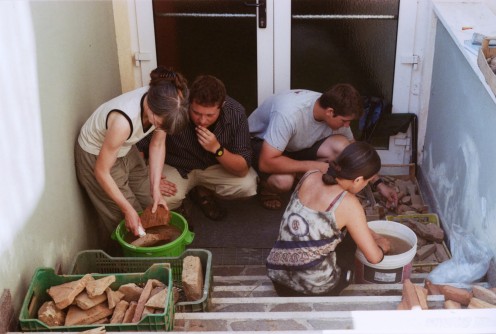 Newswise — Over the summer a team of faculty and students from University of Kentucky discovered evidence of not just one lost community, but two in northern Italy. Using their archaeological expertise and modern technology, data was collected indicating the existence of a Roman settlement and below that, a possible prehistoric site. Many years ago, archaeologist and art historian Paolo Visonà, a native of northern Italy and adjunct associate professor of art history in the UK School of Art and Visual Studies at the UK College of Fine Arts, first learned of a possible ancient settlement from a farmer in Valbruna, near the village of Tezze di Arzignano. While working his family's land, Battista Carlotto had discovered artifacts that looked to Visonà like ceramics, mosaic, and glass of the Roman Empire. Curiosity of what lay beneath the farmland was piqued in both gentlemen. With the approval of Carlotto and with little time to waste due to growing development in the area, Visonà began to research historical accounts of the region. Manuscripts found in Vicenza's Bertoliana Library confirmed Visonà's suspicion; in the late 18th century witnesses had shared accounts of seeing a Roman city's remains in the vicinity. Not wanting to disrupt Carlotto's working farm, Visonà had to find a way to find evidence of this community while not being invasive to the surroundings. That's when the expertise of colleague George Crothers, an associate professor of anthropology in the UK College of Arts and Sciences, came to mind. "George had the background to do the type of research that fit the characteristics of this new site, which had never been previously investigated to the extent we wanted." "My involvement was to use geophysical techniques and geophysical instruments to find out what we could about architectural features at this site," Crothers said. "It had not been excavated, the geophysical techniques is one way to look below ground without disturbing it." With Crothers' guidance, the UK team used a magnetometer and ground penetrating radar. A magnetometer measures variations in the magnetic intensity of the soil and can detect objects and features buried in the ground. The ground penetrating radar induces radar waves in the ground and reads the reflection. Working with two students, Donald Handshoe and Justin Carlson, the UK team analyzed the equipment's readings to interpret their findings and create a map of what was below the surface. First, the team confirmed what appeared to be evidence of a road and walls that indicated the presence of Roman buildings. According to the materials found on the surface and during farm work, the settlement could have existed more than 400 years from the first century B.C. to the third or fourth century A.D. The manuscript information indicated that it was very extensive. "We had 500 years of information that was all scattered and never really put together or even looked at by scientists, which included some very detailed manuscript information by eyewitnesses who actually saw the Roman town on two different occasions when it was uncovered by flooding," Visonà said. But as they "dug deeper" into their findings, the instruments’ readings also revealed the presence of large circular features below the Roman site structures. "The circular ones were a complete surprise — this was totally unexpected because first of all they were large," Visonà said. "The radar told us those were much deeper than the structures with right angles, which had to be Roman. So we began to differentiate between them. Since the circular features preceded the Roman ones, they could only be prehistoric." Based on their research, Visonà suggests that these features could be evidence of huts of an indigenous prehistoric population. Their settlements could date from the Neolithic to the late Bronze Age. The name of the ancient Roman town may have been Dripsinum. Ancient sources indicate that the Dripsinates, a sub-Alpine community, lived in this area of northern Italy. In the future, the UK team hopes to return to do more research at the site. Currently, the UK group is working with the University of Venice Ca-Foscari, which is analyzing some of the materials found at the site. Visonà and Crothers' trip was sponsored by a research support grant from the UK Office of the Vice President for Research. The team's stay was approved and supported by the city of Arzignano, Italy.