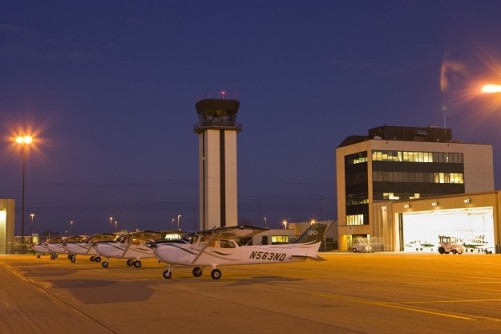 For the past two years, Paul Drechsel, assistant chair for the University of North Dakota Air Traffic Control Program, has been on a mission to make the road to becoming an air traffic controller (ATC) a little less bumpy.

That’s why Drechsel, an associate professor of aviation at UND’s John D. Odegard School of Aerospace Sciences, is lauding recently signed legislation out of Congress. The new law reverses federal aviation hiring policies that, in a sense, would have diminished a degree from certified ATC training institution such as UND.

In June, the Government Accountability Office found that the Federal Aviation Administration (FAA) transitioned to its new hiring policies without the proper implementation and planning among other concerns.

The new FAA reauthorization bill, signed by President Obama last month, alters ATC hiring processes launched in 2014. The new legislation breaks down job opening for aspiring controllers in into two separate pools. One pool includes applicants who have successfully completed ATC training from an approved institution, such as UND, or eligible veterans.

“That is very important,” Drechsel said. “Instead of ATC jobs being open to anybody, it now signifies that our degree is very important for these students to have an opportunity to become employed.”

The other pool holds individuals who apply under a vacancy announcement from the FAA. Because of this, UND graduates looking to secure a career in ATC now have a distinct advantage when pursuing a job as a controller.

The FAA will open its next hiring bid from Aug. 8-15, and the revamped policies are included for this new round of hires.

Another change that UND officials are happy about is that the FAA is no longer allowed to use biographical assessments to determine hiring eligibility.

Before the change, the biographical assessments comprised a number of survey questions unrelated to one’s actual education or training to be a successful air traffic controller.

“Now we’re taking individuals who have been trained and have a degree in ATC management and know what the job entails,” Drechsel said. “They’ve done hands-on simulation training in order to acquire the skills needed to successfully manage air traffic.”

When the FAA implemented the new hiring practices in 2014, Drechsel contacted North Dakota’s Congressional Delegation and explained its shortcomings and direct impacts to students and institutions such as UND.

“Without their help, none of this could have changed,” Drechsel said. “So I really want to commend our Delegation and their staff for a lot of the work they’ve done.”

“We worked to advance this legislation because it takes an important step forward in addressing problems with the FAA’s hiring process by ensuring that graduates of FAA certified Collegiate Training Initiatives schools like UND get the opportunity they deserve.”

The new FAA bill had a range of other important provisions for UND including language that reauthorized the UND-based Northern Plains Unmanned Aircraft Systems Test Site and six other UAS test sites for three more years, according to Hoeven.

“We can build the infrastructure our state needs to support a growing and thriving population, and we can do it by supporting the extensive training programs at UND through a streamlined hiring process to create a strong air traffic control workforce for years to come,” Heitkamp said.

U.S. Rep. Kevin Cramer had conversations with FAA Administrator Michael Huerta about the abrupt changes and alleged impropriety in the ATC hiring process in addition to asking for an FAA investigation. He also co-sponsored several bills addressing the ATC hiring issue.

“I was concerned about the FAA’s lack of transparency in changing its hiring process with so little advance notice or explanation,” said Cramer. “It especially impacted students like those at UND planning to pursue an ATC career with the FAA.”