Understanding the Body’s Response to Worms and Allergies 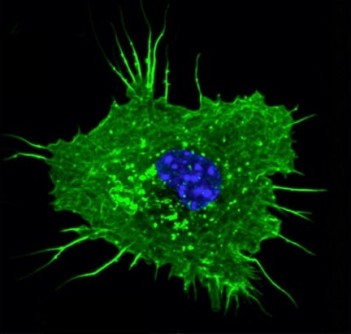 Newswise — Research from The University of Manchester is bringing scientists a step closer to developing new therapies for controlling the body’s response to allergies and parasitic worm infections.

In a paper published in Nature Communications, Professor Andrew MacDonald and his team at the Manchester Collaborative Centre for Inflammation Research discovered a new way that immune cells control inflammation during worm infection or an allergic response like asthma. It’s important to understand how this type of inflammation is controlled as it can be very damaging and in some cases lead to long term conditions.

Professor MacDonald explains the reasons behind his work: “Although both worm infections and allergies exert a devastating global impact and lack effective vaccines or refined treatments, basic knowledge of the key cell types and mediators that control immunity and inflammation against either condition is currently limited.”

To study how inflammation is controlled the team looked at dendritic cells - a particular type of cell in the immune system that is a vital first responder to worms or allergies. The main function of dendritic cells is to recognise infection and switch on channels to combat it, including inflammation.

What isn’t known is precisely how immune cells switch on the kind of inflammation found during worm infections or allergies.

Professor MacDonald and his team studied dendritic cells in the lab and animal models to see how they were activated by parasitic worms, or lung allergens such as house dust mites.

The team also identified that Mbd2 is able to influence a wide range of genes important for multiple aspects of dendritic cell function without altering their DNA sequence, meaning that Mbd2 is an ‘epigenetic’ regulator.

Professor MacDonald explains: “For the first time we have identified that this protein is a key controller of dendritic cells during inflammation against parasitic worms or allergens. It’s an important step, as all inflammation is not identical, and scientists try to understand which specific cells and chemicals are more important in the body’s response to particular infections. In the past, medicines have had a broad approach, affecting all aspects of a condition rather than being targeted. In the future it might be possible to create medicines that control the inflammation caused specifically by an allergy or a parasitic worm, rather than by a virus such as a common cold.”

Professor MacDonald continues: “With billions of people affected by both allergies and worm infections around the world it is vital that we develop better methods of treatment. It’s also important to tackle the inflammation caused by these conditions, as it has been shown to play a role in the development of longer term diseases such as asthma.”