31-Mar-2010 8:00 AM EDT, by University of Arkansas, Fayetteville
favorite_border

Research Could Lead to the Development of Earlier Detection

Newswise — Building on previous findings demonstrating that breast cancer cells emit unique electromagnetic signals, engineering researchers at the University of Arkansas have found that a single cancerous cell produces electric signals proportional to the speed at which the cell divides. Their model reveals that heightened movement of ions at the boundary of the cancerous cell produces larger electrical signals.

The findings will help scientists understand the biophysics associated with rapidly dividing breast cancer cells and may contribute to the development of new detection and treatment techniques.

“All cells maintain a difference in voltage between their intracellular and extracellular media,” said Ahmed Hassan, doctoral student in electrical engineering. “Previous work found that MCF-7, a standard breast cancer cell line, hyperpolarizes – meaning simply that it increases its membrane voltage in negative polarity – during two critical stages prior to cell division. What we’re trying to do is build a better understanding of how this complicated mechanism works.”

Hassan works under the direction of Magda El-Shenawee, associate professor of electrical engineering. In previous work, El-Shenawee created a microwave-imaging system that provides sharp, three-dimensional images of hard objects buried within soft tissue. She was able to do this by transmitting and receiving electromagnetic waves that traveled through soft tissue and bounced off the hard object.

The new direction of El-Shenawee’s research does not require transmission of electromagnetic waves. Rather, in a process known as passive biopotential diagnosis – special sensors only receive electromagnetic waves. They read the unique signals released by activity within and around a growing tumor. As mentioned above, Hassan and El-Shenawee focused on a single cell, which may help researchers recognize abnormalities long before cell aggregates reach the tumor stage. A 1-millimeter tumor comprises tens of thousands of cells.

To understand the biomagnetic signals of a single breast cancer cell, Hassan and El-Shenawee created a two-dimensional, biophysics-based model with computer simulations that allowed them to obtain densities of electrical current based on space and time. They then integrated the current densities to calculate the biomagnetic fields produced by a cancerous lesion. The model avoided the risk of oversimplification by placing the cell in a semi-finite, dynamic environment with realistic anatomical features such as cell membranes, blood vessels and surrounding tissue boundaries.

They focused on hyperpolarization during what is known as the G1/Synthesis transition, a critical process that occurs within a cell before it starts to divide. During the G1 stage, the cell grows and proteins are created. The Synthesis stage includes DNA synthesis and chromosome replication to provide a new set of chromosomes for a new cell. As Hassan mentioned, previous experimental measurements on cancerous MCF-7 cells revealed that during the transition between the G1 and Synthesis stages, electrical changes occurred.

The numerical results of the Arkansas research validated the findings above. Beyond this, Hassan and El-Shenawee discovered that shorter G1/Synthesis-transition durations and heightened movement of ions at the cell boundary was associated with a higher magnitude of electromagnetic signals.

In a future study, the researchers will couple the single-cell model with a tumor-growth model to produce simulations of electric signals created by a whole tumor.

“We are motivated to provide a tool for understanding experimental measurements that prove that growing tumor cells indeed generate electric signals,” El-Shenawee said. “This multidisciplinary model has the potential to advance the biopotential diagnosis system to achieve high accuracy in measuring benign versus malignant tumors. Another benefit is that there would be no side effects, as no chemical or radiation would be sent into the body.”

The researchers’ computer modeling work was done using Star of Arkansas, a supercomputer in the Arkansas High Performance Computing Center at the University of Arkansas.

Their study was published in a recent issue of IEEE Transactions on Biomedical Engineering. Copies of the study are available upon request. 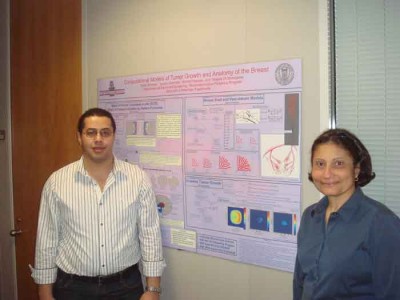