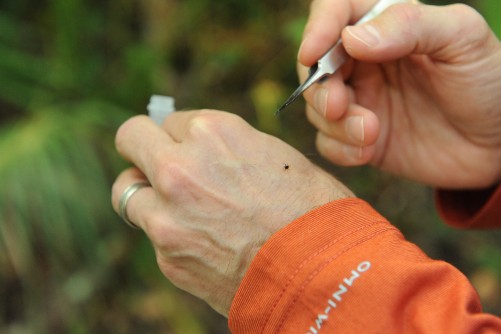 Dr. Kerry Clark, associate professor of public health at the University of North Florida, takes a close look at a tick. 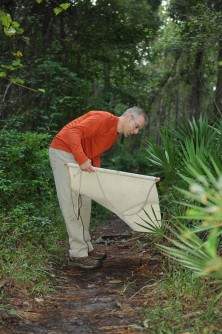 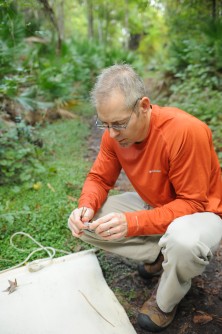 Newswise — Dr. Kerry Clark, associate professor of public health at the University of North Florida in Jacksonville, and his colleagues have found additional cases of Lyme disease in patients from several states in the southeastern U.S. These cases include two additional Lyme disease Borrelia species recently identified in patients in Florida and Georgia. Overall, 42 percent of 215 patients from southern states tested positive for some Lyme Borrelia species. More than 90 cases of Lyme infection were confirmed among patients from Florida, Georgia, North Carolina, Texas and Virginia. Of these southern cases, 69 percent were found to have infection with B. burgdorferi, 22 percent with B. americana and 3 percent with B. andersonii.

“For years, medical practitioners and the public have been told that Lyme disease is rare to nonexistent in the southern United States. Our earlier research demonstrated that Lyme disease bacteria were present in animals and ticks in our region,” said Clark. “The more recent evidence shows that the disease is also present in human patients in the South, and suggests that it’s common among patients presenting with signs and symptoms consistent with the clinical presentation of Lyme disease recognized in the northeastern part of the country.”

His new paper, “Geographical and Genospecies Distribution of Borrelia burgdorferi sensu lato DNA Detected in Humans in the USA,” was published in the Journal of Medical Microbiology in February. Dr. Brian Leydet in the Department of Pathobiological Sciences at Louisiana State University and Dr. Clifford Threlkeld of Ameripath Central Florida collaborated with Clark in his latest research.

The findings are significant for several reasons. They provide additional evidence that multiple Lyme Borrelia species are associated with human disease in the U.S., similar to the situation in Europe. The new findings expand the geographic area where Lyme disease should be considered by medical providers and citizens alike, and suggest that human cases of Lyme disease in the southern U.S. may be much more common than previously recognized.

Prior to Clark’s previously published paper in 2013, only one or two Lyme bacterial species, Borrelia burgdorferi and B. bissettii, were recognized to cause disease in North America. Current testing methods and interpretation criteria, designed to detect just one species (B. burgdorferi), may explain many of the complaints involving the unreliability of Lyme disease tests in the U.S.

Most of the patients included in Clark’s study were suffering from a variety of chronic health problems, such as fatigue, headaches, muscle and joint pain and cognitive dysfunction. As a result, Clark’s research may help millions of chronically ill people living in areas where Lyme disease wasn’t previously recognized. Called “The New Great Imitator,” Lyme disease is often mistaken for illnesses such as fibromyalgia, chronic fatigue syndrome, lupus, multiple sclerosis, rheumatoid arthritis, Lou Gehrig’s disease (ALS), Parkinson’s, ADHD and even Alzheimer’s.

“These groups have been significant in raising funds to support my research over the past several years. Without their support, I wouldn’t be able to continue this work. This shows that community groups and scientists can collaborate effectively to create changes to improve public health, both locally and regionally,” said Clark.

In addition to research and teaching, Clark serves as a board member for the FLDA, with whom he collaborates in Lyme disease education and awareness activities. On May 17, Clark and other guests will speak at the first Lyme in the South Music Fest at River City Brewing Company in downtown Jacksonville, Fla. This event is a benefit concert and festival dedicated to the prevention, awareness and cure of Lyme disease and other tick-borne illnesses that have become the fastest-growing infectious diseases in the country. Proceeds from this event will provide further support for Clark’s research program. Learn more about the event at http://www.lymeinthesouth.com UNF, a nationally ranked university located on an environmentally beautiful campus, offers students who are dedicated to enriching the lives of others the opportunity to build their own futures through a well-rounded education. 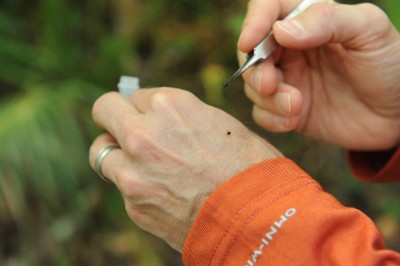 Caption: Dr. Kerry Clark, associate professor of public health at the University of North Florida, takes a close look at a tick. 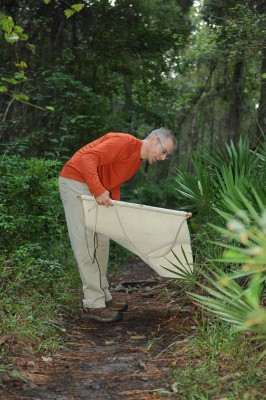 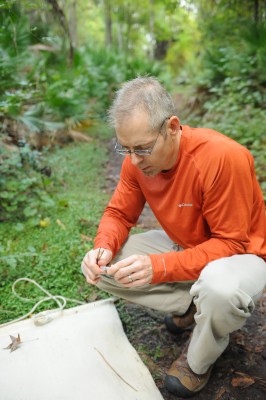