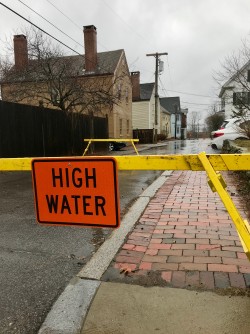 Roads closed due to high tide floods in Portsmouth, N.H. 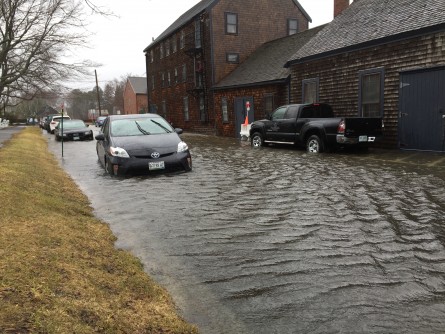 Flooded roads around Prescott Park in Portsmouth, N.H. after coastal storm in March, 2018. 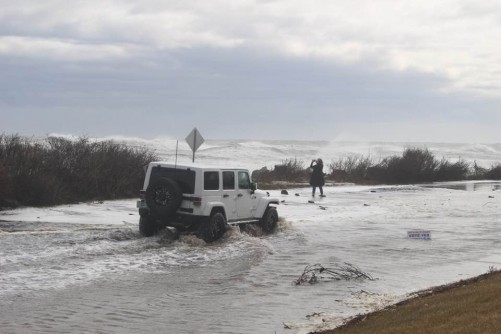 Driver ventures down flooded road made impassable by coastal flooding in Rye, N.H. 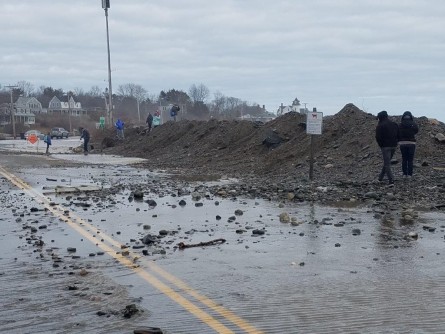 Newswise — DURHAM, N.H. – High tide floods, or so-called “nuisance flooding,” that happen along shore roadways during seasonal high tides or minor wind events are occurring far more frequently than ever before. Researchers at the University of New Hampshire have found that in the past 20 years roads along the East Coast have experienced a 90 percent increase in flooding – often making the roads in these communities impassable, causing delays, as well as stress, and impacting transportation of goods and services.

“This could be just the beginning of impact on these areas,” said Jennifer Jacobs, professor of civil and environmental engineering. “With the continued rise in sea levels, nuisance-flood frequency is projected to grow and the effect on the physical roads and the people that live along the coastline is concerning.”

In their study, recently published in the journal Transportation Research Record, the researchers found that tidal nuisance flooding threatens over 7,500 miles of roadways along the entire East Coast, with over 400 miles of that being interstate roads. They estimate that this causes over 100 million hours of delays each year for drivers on those roads and that number could rise to more than 3.4 billion hours by 2100. By the middle of the century (2056 –2065), they predict nuisance flooding could occur almost daily at specific sites along the shores of Connecticut, New Jersey, Maryland, the District of Columbia, North Carolina, and Florida under an intermediate sea-level-rise scenario.

“As tidal coastal flooding increases in the coming years, there will also be issues with the transportation infrastructure,” said Jacobs. “We’ve already seen billions of dollars in damage to coastal roadways from recent hurricanes. In the future, with rising sea levels, we expect to see more frequent issues, more damage, and impact to roadways even farther inland.”

Researchers note that these impacts are not limited to storm events. They say that critical transportation infrastructure is at risk from sea level rise alone; which numerous transportation agencies project to be between one to eight feet, along the U.S. Atlantic and Gulf Coasts.

The researchers say that the goal of this study is to better understand the type and extent of roadway infrastructures that are vulnerable to high tide flooding and the transportation impacts now and in the future due to sea level rise. This study focuses on the East Coast of the United States and includes all coastal states from Maine to Florida, including the Gulf Coast of Florida and Key West.