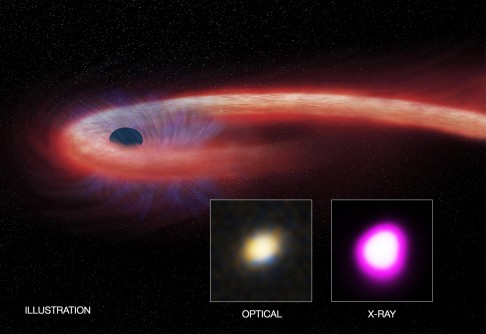 Newswise — DURHAM, N.H. – A giant black hole ripped apart a nearby star and then continued to feed off its remains for close to a decade, according to research led by the University of New Hampshire. This black hole meal is more than 10 times longer than any other previous episode of a star’s death.

“We have witnessed a star’s spectacular and prolonged demise,” said Dacheng Lin, a research scientist at UNH’s Space Science Center and the study’s lead author. “Dozens of these so-called tidal disruption events have been detected since the 1990s, but none that remained bright for nearly as long as this one.”

Using data from a trio of orbiting X-ray telescopes, NASA’s Chandra X-ray Observatory and Swift Satellite as well as ESA’s XMM-Newton, researchers found evidence of a massive “tidal disruption event” (TDE). Tidal forces, due to the intense gravity from the black hole, can destroy an object – such as a star – that wanders too close. During a TDE, some of the stellar debris is flung outward at high speeds, while the rest falls toward the black hole. As it travels inward, and is ingested by the black hole, the material heats up to millions of degrees and generates a distinct X-ray flare.

These multiwavelength flares, which can be viewed by the satellites, help to study otherwise dormant massive back holes. Previous flares were short-lived, typically becoming very faint in a year, but this super-long X-ray flare has been persistently bright for close to a decade. The extraordinary long bright phase of this TDE means that either this was the most massive star ever to be torn apart during one of these events, or the first where a smaller star was completely torn apart.

The X-ray source containing this force-fed black hole, known by its abbreviated name of XJ1500+0154, is located in a small galaxy about 1.8 billion light years from Earth.The X-ray data also indicates that radiation from material surrounding this black hole has consistently surpassed the so-called Eddington limit, defined by a balance between the outward pressure of radiation from the hot gas and the inward pull of the gravity of the black hole.

Based on the modeling by the researchers the black hole’s feeding supply should be significantly reduced in the next decade and begin to fade in the next several years.

A paper describing these results appears in the February 6 issue of the journal Nature Astronomy which can be viewed here: http://www.nature.com/articles/s41550-016-0033

Lin received support for this work from NASA (Chandra Award Number GO5-16087X). The Chandra X-ray Observatory is operated by the Smithsonian Astrophysical Observatory for and on behalf of NASA.