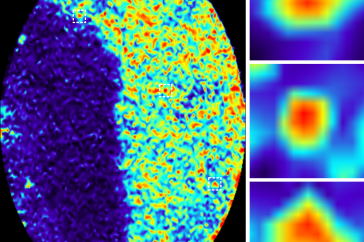 On the left is an enlarged image showing many hippocampal neurons, most of which are silent and only a few are active. On the right are close ups of three highly active neurons, or memory cells, which become synchronized after memory formation (images modified from Zhou et al., 2020 FASEB Journal).

Newswise — DURHAM, N.H. – The phrase “Pavlov’s dogs” has long evoked images of bells, food and salivating dogs. Even though this tried-and-true model of repetitive patterns mimics a variety of learning processes, what happens on a cellular level in the brain isn’t clear. Researchers at the University of New Hampshire took a closer look at the hippocampus, the part of the brain critical for long-term memory formation, and found that the neurons involved in so-called Pavlovian learning shift their behavior during the process and become more synchronized when a memory is being formed – a finding that helps better understand memory mechanisms and provides clues for the development of future therapies for memory-related diseases like dementia, autism and post-traumatic stress disorder (PTSD).

“There are tens of millions of neurons in the hippocampus but only a small fraction of them are involved in this learning process” said Xuanmao (Mao) Chen, assistant professor of neurobiology. “Before engaging in Pavlovian conditioning, these neurons are highly active, almost chaotic, without much coordination with each other, but during memory formation they change their pattern from random to synchronized, likely forging new connecting circuits in the brain to bridge two unrelated events.

In the study, recently published in The FASEB Journal, researchers looked at Pavlovian learning patterns, or respondent conditioning, in mice. In the beginning, before any repetitive learning exercises, the mice did not know what to expect and using special imaging with an endomicroscope the researchers saw that the neural activity was disorderly. But after repeating different tasks associated with a conditional stimulus, like a tone or bell, the mice began to recognize the pattern and the highly active neurons became more synchronized. The researchers hypothesize that without forming synchronization, animals cannot form or retrieve this type of memory.

In the 1890’s, Russian psychologist, Ivan Pavlov discovered classical conditioning through repetitive patterns of bell ringing which signaled to his dogs that food was on its way and stimulated salivation. This same learned behavior is important for episodic knowledge which is the basis for such things as learning vocabulary, textbook knowledge, and memorizing account passwords. Abnormal learning processing and memory formation are associated with a number of diseases like dementia, autism, and PTSD. People who struggle with these cognitive dysfunction-related disorders may have trouble retaining memories or can even form too strong a memory, as with PTSD patients. The UNH researchers believe that understanding the fundamentals of how classical conditioning shape neural connections in the brain could speed up the development of treatments for these disorders in the future.

Contributing to these findings are Yuxin Zhou, doctoral candidate; Liyan Qiu, research scientist; both at UNH, and Haiying Wang, assistant professor at the University of Connecticut.

This work was supported by the National Institutes of Health (NIH) and the Cole Neuroscience and Behavioral Faculty Research Awards.

The University of New Hampshire inspires innovation and transforms lives in our state, nation and world. More than 16,000 students from all 50 states and 71 countries engage with an award-winning faculty in top-ranked programs in business, engineering, law, health and human services, liberal arts and the sciences across more than 200 programs of study. As one of the nation’s highest-performing research universities, UNH partners with NASA, NOAA, NSF and NIH, and receives more than $110 million in competitive external funding every year to further explore and define the frontiers of land, sea and space.

Caption: A before and after view of four memory cells in the hippocampus. On the left, they are randomly active before learning, and on the right, they show synchronized activity after learning, when a memory is formed (images modified from Zhou et al., 2020 FASEB Journal).

Caption: On the left is an enlarged image showing many hippocampal neurons, most of which are silent and only a few are active. On the right are close ups of three highly active neurons, or memory cells, which become synchronized after memory formation (images modified from Zhou et al., 2020 FASEB Journal).